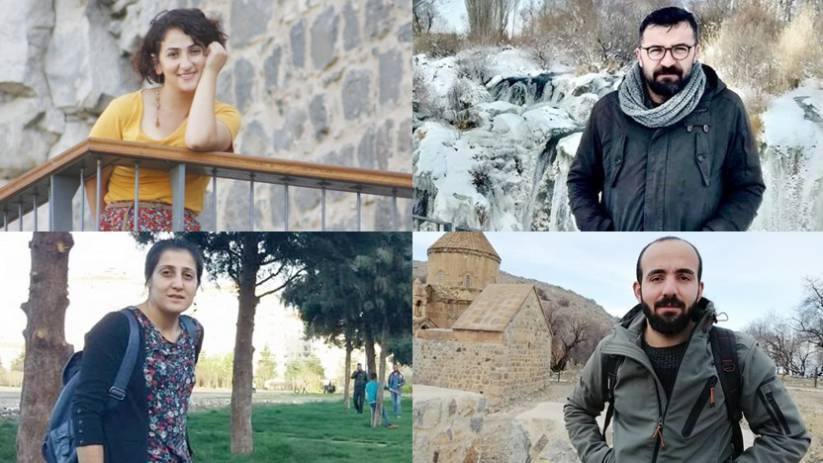 Four journalists were detained on Tuesday in the eastern province of Van after they repeatedly reported on an incident in which two Kurdish villagers were allegedly tortured and later thrown from a military helicopter.

Police conducted dawn raids on the homes of Adnan Bilen and Cemil Uğur from the Mezopotamya News Agency (MA) in addition to those of Şehriban Abi and Nazan Sala from Jinnews.

MA announced that a former worker, newspaper distributor Şükran Erdem, was also detained as part of the ongoing investigation.

The journalists’ equipment and materials were reportedly seized by the police during the operation on the residences and the agency office. The journalists will reportedly not be able to speak to their lawyers for 24 hours in line with regulations.

The journalists recently reported serious allegations of torture perpetrated by Turkish security forces on two Kurdish villagers, Servet Turgut (55) and Osman Şiban (50). After allegedly being tortured and thrown from a military helicopter, Turgut succumbed to his injuries on September 30, while Şiban was discharged from the hospital but reportedly still suffers from partial memory loss.

“We condemn the operation[s] on the Van office of the Mezopotamya Agency and on the 4 journalists who were detained. The [detentions] reflect the vengeful approach of [the Justice and Development Party (AKP) government] that targeted the MA Van bureau because it made Turkey aware of the incident in which villagers were thrown from a helicopter,” the HDP tweeted.

The journalists had revealed documents that confirmed the claims of torture and the two men having been thrown from a helicopter, while Turkish media outlets did not report on the incident or the allegations. For example, the news agency published a hospital report saying the reason for the villagers’ initial hospitalization was trauma consistent with a fall from a height.

Amnesty International released a public statement on September 25 saying it considered the allegations credible and called for a “prompt, independent and impartial investigation” into the incident. The organization added that it was concerned about the victims’ right to access justice.

The Van Chief Public Prosecutor’s Office said at the time that it was conducting two criminal investigations, one into the two men and the other into the torture allegations. Secrecy orders were issued for both probes, and the lawyers for the victims were not able to access the investigation files.

Many reporters for the pro-Kurdish MA have been arrested in the past for suspected membership in the outlawed Kurdistan Workers’ Party (PKK), which is designated as a terrorist organization by Turkey, the United States and the European Union. The PKK is an armed separatist group that has waged an insurgency in Turkey’s predominantly Kurdish Southeast for more than three decades.

Uğur was also detained on August 23, 2016 on terror charges while covering the “Freedom Watch” held in front of Mersin Prison in solidarity with imprisoned writers. Uğur was subjected to ill-treatment, insults and death threats, he told PEN International, a worldwide writers association with 145 centers in more than 100 countries, at the time.

On September 25, 82 HDP politicians were detained over the 2014 Kobane protests, six years after the events. The detentions were considered part of a new AKP crackdown on Kurdish politicians.