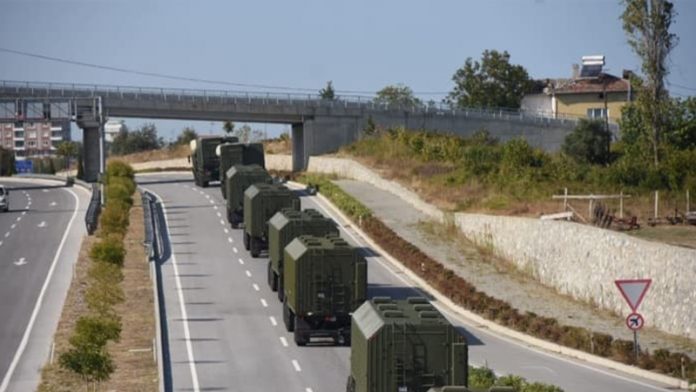 Turkey is planning to conduct a comprehensive test of the air defense units without activating the system, Bloomberg reported on the same day, citing anonymous sources.

Footage circulating on social media on Tuesday showed military equipment, reportedly S-400 components, on the move, and a NOTAM filed by Turkey to alert pilots of potential hazards said the Sinop airport was closed to take-offs and landings on Tuesday between 9:00 a.m. and 2:30 p.m. local time.

The reports of the S-400 air defense system deployed to Sinop came following an exclusive report by Turkish Minute published on Friday that cited a piece of official correspondence.

The document seen by Turkish Minute included details of a test to be conducted at the Sinop Missile Range that aimed “to ensure the engagement capability of the S-400 weapons system, the detection and tracking capability of the system’s radars, the communications system capabilities, and the control of the firing and command control capabilities.”

There has been no official comment on the reports of deployment.

Washington is wary about the S-400 system collecting data on its F-35 stealth fighter jets, and Turkey, a NATO ally, purchased the system in 2017 after moving closer to Russia since the first leader to call President Erdoğan in support after a coup attempt on July 15, 2016 was Vladimir Putin.

US-Turkey tensions escalated after the acquisition, and Washington’s attempts to persuade Ankara to dispose of the system were in vain.

After Russia began shipping the S-400 system to Turkey in July 2019, the US removed Turkey from its list of F-35 program partners.

On July 17 the US House of Representatives passed the Countering Russia’s Export of Arms Act with bipartisan support, which would designate the acquisition of the S-400 by Turkey as “a significant transaction pursuant to Section 231 of the Countering America’s Adversaries Through Sanctions Act (CAATSA),” Republican Representative Adam Kinzinger said at the time.

“Not later than 30 days after the date of the enactment of this Act, the President shall, pursuant to section 231 of the Countering America’s Adversaries Through Sanctions Act, impose five or more of the sanctions described in section 235 of such Act (22 USC 8 9529) with respect to the Government of Turkey’s acquisition of the S-400 air and missile defense system from the Russian Federation,” the bill approved in the House of Representatives stipulates.

US President Donald Trump refrained from imposing harsh CAATSA sanctions on Turkey at the time, restricting the country’s reaction to eliminating Turkey from the F-35 list.