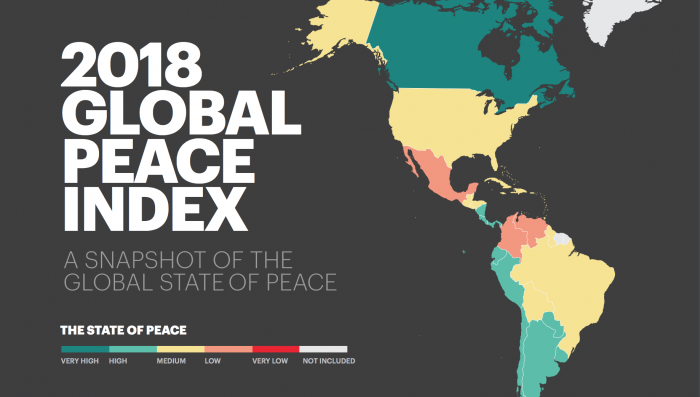 Turkey is the 149th most peaceful county among 163 countries in the world, according to the Global Peace Index 2018 (GPI) released by the Australian-based Institute for Economics & Peace (IEP) on Wednesday.

Turkey, which has been under the rule of the Justice and Development Party (AKP) led by Turkish President Recep Tayyip Erdoğan for 16 years, was ranked 146th last year in the same index, 145th in 2016 and 135th in 2015.

Measuring peace in a complex world, the Global Peace Index 2018 showed the world is less peaceful today than at any time in the last decade. The report found that the global level of peace has deteriorated by 0.27 percent over the last year.

This is the fourth successive year of deterioration, with the index finding that 92 countries have deteriorated, while 71 have improved. The report reveals a world in which tensions, conflicts and crises that have emerged over the past decade remain unresolved, causing a gradual, sustained decline in global levels of peacefulness.

The 12th edition of the GPI ranked 163 independent states and territories according to their level of peacefulness. The GPI is the world’s leading measure of global peacefulness. This report presents the most comprehensive data-driven analysis to date on trends in peace, its economic value and how to develop peaceful societies.

The GPI covers 99.7 percent of the world’s population, using 23 qualitative and quantitative indicators from highly respected sources, and measures the state of peace using three thematic domains: the level of Societal Safety and Security; the extent of Ongoing Domestic and International Conflict; and the degree of Militarization.