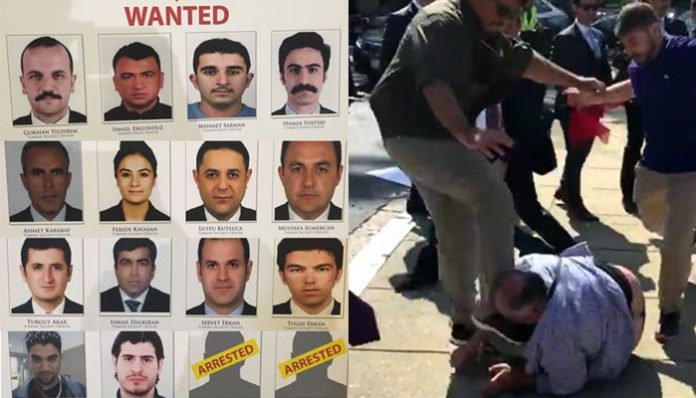 Turkey’s President Recep Tayyip Erdoğan on Friday called a recent US indictment against his bodyguards for violently attacking protesters in Washington, D.C., “scandalous,” claiming that the US is protecting the Gülen movement.

Erdoğan also stated that an indictment drafted by a prosecutor who was appointed by the Obama administration is not binding for him. According to Erdoğan, his bodyguards did their job of protecting him.

In May, Erdoğan’s bodyguards were captured on camera kicking and hitting mostly Kurdish protesters outside the residence of the Turkish ambassador to the US as Erdoğan apparently watched the brawl from his car.

However, Erdoğan claimed that the indictment of his bodyguards is another affront in strained relations with the US. According to Erdoğan, the indictment aims to protect the Gülen movement, which he holds responsible for anything that goes wrong in Turkey.

Before Erdoğan’s criticism of the US judicial system, the Turkish Foreign Ministry issued a statement protesting the indictment of 15 members of Erdoğan’s security detail who attacked demonstrators in Washington, D.C., during an official visit in May.

The indictments, which were announced Tuesday, accused 19 people, including 15 of Erdoğan’s guards, of attacking people who were protesting the visit of Erdoğan and of committing a crime of violence. Some of them also face charges of assault with a deadly weapon.

“We are strongly protesting that an unfair and biased indictment which is even accusing those who were not there and who have never been to the US has been accepted,” said the statement.

The ministry also said the incidents were caused by the negligence of local security officials and provocations by outlawed Kurdistan Workers’ Party (PKK) members and that the security of the Turkish delegation could not be ensured.