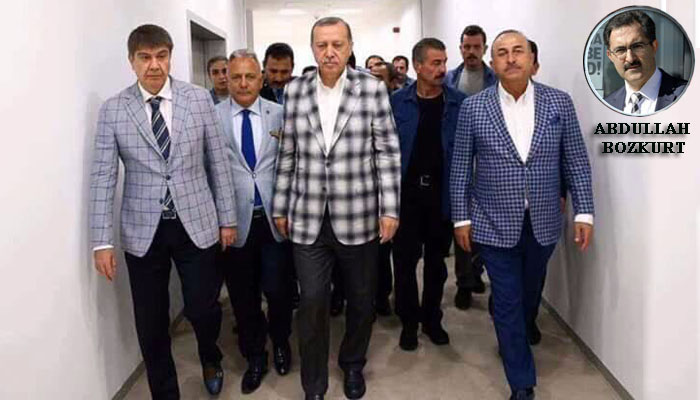 Almost the entire Cabinet and senior members of the ruling Justice and Development party (AKP) government now follow the personality cult of Turkish President Recep Tayyip Erdoğan in a painter’s brush style, trimmed mustache and a wearing a checkered jacket that looks like a tablecloth, signs that Turkey’s dictator is following in the path of his contemporary strongman peers in constructing a myth around his personality.

The checkered jacket, Erdoğan’s trademark, has been in play for some time, and many people have started wearing similar ones, often with a square blue design, in defiance of the blue and black suits traditionally worn by Turkish politicians. But the mustache fashion was really kicked off in 2016 when Erdoğan ordered his executive secretary, Hasan Doğan, to grow one. That was followed by deputy prime ministers and other Cabinet members who had never before had a mustache, and Erdoğan closely followed whether his henchmen paid any attention to his fashion instructions. Taking the hint, most lawmakers in Erdoğan’s party joined the mustache club in order not to irritate the leader and in the hope that they might win a few points with the president.

The campaign of growing a mustache and wearing checkered suits is actually an indication of a bigger picture we see in today’s leadership in Turkey, which has been stymied by the personality cult of one man who calls all the shots, from how one presents oneself to what one wears. He is micromanaging everything, avoiding delegating to others. He has been hostile to diversity and persistent on uniformity during his iron-grip rule. It says a lot about Erdoğan’s self-arrogant, overconfident and narcissist character, which does not tolerate the right to dissent or the right to freedom of expression.

Erdoğan’s personality cult has been in the making for some time, with most Turkish media publishing his pictures in headline stories on the front page, while offices in government buildings feature Erdoğan’s photos all over the walls. His public speeches that take place several times in a single day sometimes are televised live by more than a dozen TV networks, while his propagandists fill the air waves in prime-time TV news and debate programs.

His family and associates have spent enough time, energy and funds to build Erdoğan’s myth. From documentaries to movies, Erdoğan’s family has been closely involved in making films about him, the leaked Red-Hack emails of Erdoğan’s son-in-law Berat Albayrak revealed. The script of a movie titled “Reis” (Chief), released on March 3, 2017, was discussed extensively among family members, producers and others for two years before it made it to the big screen. The AKP grassroots were mobilized to watch his movie in theaters when it was released in an effort to make the movie a blockbuster. Not only public networks, but also private TV stations aired documentaries celebrating Erdoğan’s life.

With revisionist history and reconstruction of the past, Erdoğan is creating his own narrative based on neo-Ottoman aspirations, positioning himself as the descendant of the Turkish sultans who were sworn to protect the Islamic Caliphate. A day after the disputed April 16, 2017 constitutional referendum that gave Erdoğan imperial powers, the Turkish president visited the tomb of Ottoman Sultan Yavuz Selim with a media entourage and posed while praying there. It was Selim who took over the caliphate in the 18th century after a major conquest in the Middle East. On June 7, 2017, he also repeated the Ottoman sultans’ practice of visiting the Islamic Prophet Muhammad’s holy mantle kept in the Topkapı Palace museum. In a high-profile event held in eastern Turkey on Aug. 26, 2017, Erdoğan celebrated the 946th anniversary of the Battle of Malazgirt, the victory of Seljuk Sultan Alparslan over the Byzantine Empire on Aug. 26, 1071, to bring back pre-Ottoman history. Soldiers in traditional Ottoman uniforms were standing at the podium as he delivered a firebrand speech, promising to make Turkey great again.

Naturally, this showing off by Erdoğan goes beyond Turkish borders as he tries to sell himself as the self-declared leader of all oppressed Muslims and boasts of his close interests in Muslims and Turkish diaspora communities abroad. As he continuously challenges the West with strong, hostile posturing, Erdoğan nevertheless does not forget to bash Russia, China and the Arab states once in a while. He gives the impression that he is a leader who does not hesitate to pick a fight with mighty adversaries. When his opponents strike back, not just with rhetoric but by launching real actions that have the possibility of undermining his rule back at home, Erdoğan cowers in fear and takes a step back only to make another move when the opportunity presents itself.

No doubt Erdoğan has charisma and appeal for Turks. He connects to the people with simple words, sometimes resorting to slang and street language to make a point, sprinkles some religious statements in and even cites verses from the Quran to justify what he says. He enjoys broad support not necessarily of his own doing but rather due to the terrible failure of the opposition, which seems to be in perpetual disarray in offering a credible alternative to his rule. From the days when he was mayor of Istanbul, he stashed away enough cash from municipal contracts and kickbacks to be able to spend considerable resources cultivating a personality cult. Long-serving Cabinet members in his 14-year rule are the men (interestingly no woman that one can recall) who remain loyal to him from his mayoral days in the late ’90s.

Obviously, Erdoğan’s personality cult requires demonization of his opponents, from journalists who criticize him to political parties that do not go along with his policies. He vilifies any and everybody who does not share the same philosophy and tries to discredit their standing by calling them traitors, terrorists, spies and lackeys for major powers [read: the US-led West]. On the other hand, he presents himself as a righteous leader of the people and claims his will is nothing but the will of his own people in Turkey or Muslims globally. Erdoğan often says he cares only what his people say or God instructs and does not mind what the West or others say about him or Turkey.

The pro-Erdoğan clergy has been busy furnishing religious credentials for the Turkish president as caliph, the leader of all Muslims in the world, and some even have likened him to the prophesized savior (Mahdi) at the end of time before the Apocalypse. Hayrettin Karaman, Erdoğan’s chief fatwa (religious edict) giver, claimed that defying Erdoğan is against Islam and that the Muslim faith requires believers to cast their votes for him in elections. Even legislators have glorified Erdoğan with religious references. “Erdoğan is a leader who embodies all of the characteristics of God,” AKP lawmaker Feval Aslan said, while İsmail Sezer, the AKP provincial chairman in the western province of Aydın, declared that “Erdoğan is a second prophet to us.” “Believe me, even touching our dear prime minister [Erdoğan] is a sacred prayer,” said AKP Bursa deputy Hüseyin Şahin.

Former EU affairs minister Egemen Bağış went as far as to announce that Rize, Erdoğan’s birthplace, is a sacred place. Apparently enjoying these remarks, Erdoğan has never contradicted them or chastised these people. Since religious justification carries significant weight in the Erdoğan myth, the Turkish president has often railed against the Vatican and fueled anti-Christian sentiment in Turkey. He has also bashed US-based Muslim scholar Fethullah Gülen and Ahmed al-Tayyeb, the grand imam of Egypt’s al-Azhar, two leading Islamic thinkers who challenged Erdoğan’s exploitation of Islam for political gain and personal enrichment.

The Turkish president expends time, energy and resources to export his personality cult overseas by mobilizing Turkish and Muslim diaspora groups. He diverts state funds to build mega mosques abroad to lay claim to his self-declared title of representing all Muslims of the world. His government has supported and funded parallel networks especially in Europe to organize Turks to serve his petty interests such as organizing protest rallies, spying on his critics in exile and boycotting political parties in European governments that have criticized Erdoğan’s policies. He does not realize that he is actually overreaching and disturbing Turkey’s allies and partners who are determined to check Erdoğan’s ambitions and prevent his long arm from interfering in their own affairs.

The best way to undermine Erdoğan’s personality cult is to deprive him of the attention he constantly seeks from abroad by shunning him and keeping him from high-profile events, not providing the photo opportunities he seeks and thwarting the policies he tries to advance on regional and global platforms. He must be exposed as a corrupt fraudster who justifies any means to build a personality cult and mystical leadership with a heavy dose of religious and nationalist undercurrents.