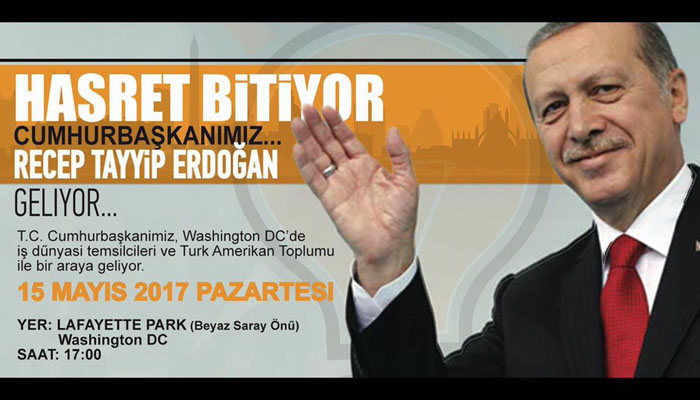 Salih Çelik, the education attaché at the Turkish Embassy in Washington, D.C., has sent messages to university students in the US to attend a gathering in front of the White House on May 15, where they will greet Turkish President Recep Tayyip Erdoğan after his meeting with US President Donald Trump.

In a message sent by Çelik to Turkish university students in the US, he said students may join the gathering at Lafayette Park at 5 p.m. on May 15, where Erdoğan will address businesspeople and the Turkish-American community.

Çelik also said there is an accommodation arrangement at the state-funded Diyanet Center of America (DCA) for students who come to the gathering from outside Washington.

“Officials will help you there [DCA] when you tell them your purpose of arrival to DC,” Çelik said.

According to a flyer Çelik shared along with his message, Erdoğan will attend the gathering at Lafayette Park at 5 p.m. on May 15 in front of the White House.

Erdoğan will travel to the US on May 15 directly from China, where he is attending an international forum.