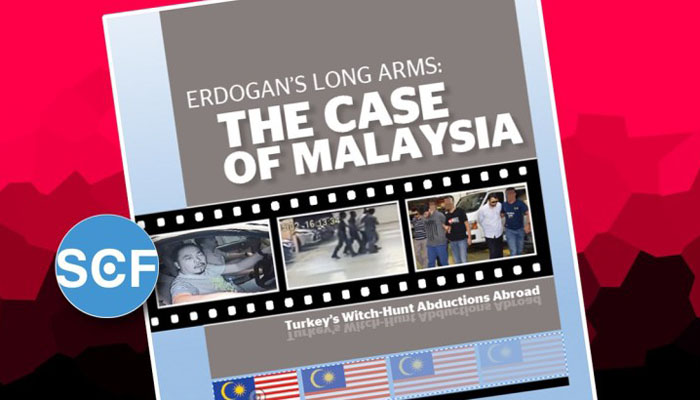 A new report by the Stockholm Center for Freedom (SCF) shows that Turkey’s Justice and Development Party (AKP) government has adopted a thuggish new tactic in persecuting its critics and opponents abroad by orchestrating abductions, enforced disappearances and extrajudicial renditions in addition to the profiling and harassment of Turkish expatriates by government institutions and clandestine groups.

The report, which was released by SCF on Saturday, was drawn from a case study on Malaysia where three Turkish citizens who are followers of faith-based Gülen movement, which is accused by Turkey of being behind a failed coup last summer, were detained and handed over to Turkish authorities over their alleged ties to the Islamic State in Iraq and the Levant (ISIL).

“The Malaysian example showed how Turkish President [Recep Tayyip] Erdoğan can drag other leaders in his crime syndicate that trumps international human rights law. Corrupt and authoritarian regimes appear to be aiding and abetting Erdoğan’s posse in his illegal manhunt in exchange for political deals and economic incentives,” said SCF President Abdullah Bozkurt in the report.

According to Bozkurt, these three people who were turned over to Turkey on false charges will be subjected to torture, abuse and inhuman treatment for simply belonging to the Gülen movement. “[The] Malaysian government will be held accountable for enabling Erdoğan’s crimes against humanity in the future,” he added.

“Although critics from all walks of life including Kurds and Alevis were targeted in general in this stigmatizing effort by the Turkish government, members of [a] civic group called the Hizmet (Gülen) movement, which is inspired by US-based Turkish Muslim cleric Fethullah Gülen, have borne the brunt of this major campaign of witch-hunt,” the report said.

According to earlier reports by SCF, Turkish embassies, government agencies including intelligence services and nongovernmental organizations affiliated with the AKP government have all been involved in the profiling and harassment of members of the Gülen movement.

The report also said the Malaysian example represents an extreme case where law-abiding and peaceful people who participated in Gülen’s advocacy of interfaith dialogue efforts were unlawfully detained and abused before being extradited to Turkey, where they will face further torture, long pre-trial detention and unfair trials.

For the full report: http://stockholmcf.org/wp-content/uploads/2017/05/Erdogans-Long-Arms-The-Case-Of-Malaysia.pdf