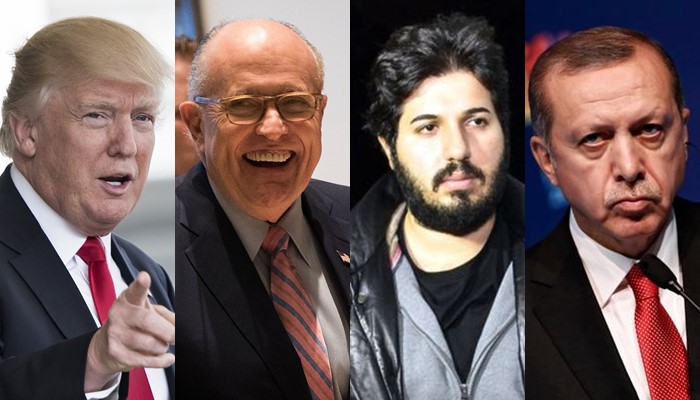 The judge in a criminal case against Turkish-Iranian businessman Reza Zarrab on charges of violating US sanctions on Iran said at a hearing on Thursday that he has some doubt as to whether former New York City Mayor Rudy Giuliani can work for the defendant while his law firm represents Turkey in other matters, The Associated Press reported.

Richard Berman, a senior judge for the Southern District of New York, requested additional information from prosecutors and a defense attorney before he decides if Zarrab can keep his attorneys despite potential conflicts of interest.

“I need to know who is looking out for Mr. Zarrab at any negotiation Mr. Giuliani or Mr. Mukasey might be engaged in,” the AP quoted Berman as saying. “It’s of concern to me,”

Zarrab had added Giuliani and former US Attorney General Michael Mukasey to his legal team in order to secure a diplomatic solution to the case, in pursuit of which the two lawyers had met secretly with Turkish President Recep Tayyip Erdoğan in Ankara. They also intend to speak to US officials in an attempt to resolve the case out of court.

Erdoğan will meet with US President Donald Trump in Washington on Tuesday, where the issue is expected to be raised. Giuliani served as a close advisor to Trump during his presidential campaign last year and often spoke at his rallies.

Although Zarrab has pleaded not guilty to charges of violating sanctions against Iran, prosecutors claim he processed hundreds of millions of dollars illegally for Iranian businesses or the government of Iran.

Affidavits filed by Giuliani and Mukasey in April to explain their roles in the case mischaracterized the alleged crimes as not serious or harmful to the United States because none of the transactions involved weapons, nuclear technology or other contraband, according to the US assistant district attorney, who rebutted that “the entities that benefitted from this alleged scheme include the Islamic Revolutionary Guard Corps and agents or affiliates of that entity, Iranian banks that have been sanctioned for their role in providing financing for Iran’s nuclear programs, and Iranian commercial airlines.”

Turkey’s Halkbank Deputy General Manager Mehmet Hakan Atilla was also arrested in New York City in late March as part of the investigation into the violation of US sanctions on Iran. He is accused of conspiring with wealthy gold trader Zarrab to conduct hundreds of millions of dollars of illegal transactions through US banks on behalf of Iran’s government and other entities in that country.

The case has raised concerns at the highest levels of Turkish power, with Foreign Minister Mevlüt Çavuşoğlu calling Atilla’s arrest “political” and President Erdoğan accusing US authorities of having “ulterior motives” in prosecuting Zarrab.