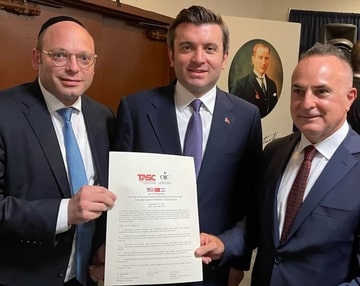 The Turkish-American National Steering Committee (TASC), known for its close ties to the government of Turkish President Recep Tayyip Erdoğan, has announced its withdrawal from a declaration it signed with the Orthodox Jewish Chamber of Commerce (OJC) after attracting criticism.

The declaration signed by the TASC and OJC on Wednesday supported enhanced trade with Israel and regional peace and condemned the stance of a pro-Palestinian movement that runs contrary to the pro-Palestine and anti-Israel discourse of the Justice and Development Party (AKP) government.

In a move that surprised many, TASC announced in a statement on Twitter on Thursday that it is withdrawing from the Joint TASC-OJC Declaration due to a lack of proper consensus.

“We look forward to further discussions and dialogue with all interested parties for peace, prosperity and security,” it added.

TASC’s withdrawal from the declaration came in the wake of growing criticism of the AKP government for hypocrisy concerning the Palestinian cause.

In the declaration TASC and the OJC opposed the Palestinian-led Boycott, Divestment and Sanctions (BDS) movement, which has campaigned in Western countries against Israel’s trade from the occupied territories.

“BDS emboldens extremism and emboldens the people which BDS claims to represent,” TASC and the OJC said in the declaration.

TASC and the OJC also promised to increase regional peace and prosperity through initiatives such as the Abraham Accords, a series of US brokered agreements in 2020 aimed at normalizing relations between Israel, the United Arab Emirates (UAE) and Bahrain. The two groups also vowed to stand together against “prejudice, hatred, anti-Semitism, Islamophobia and anti-Turkism.”

Metin Gürcan, a founding member of the opposition DEVA Party, posted a copy of the declaration on Twitter along with a message accusing the AKP government of abandoning the Palestinian cause. He said the pro-government media would have “crucified” anyone who would talk about supporting such a declaration if it had not been a pro-Erdoğan committee.

Erdoğan, who has long cast himself as the champion of the Palestinian cause, has on many occasions branded Israel a “cruel terrorist state.”

Relations between Israel and Turkey have been strained since a Turkish NGO oversaw a flotilla of ships that tried to break Israel’s blockade of the Gaza Strip in 2010.

Despite Erdoğan’s sharp criticism of Israel, there is speculation that Turkey and Israel have been looking for ways to normalize ties and re-appoint ambassadors to each other’s capitals.