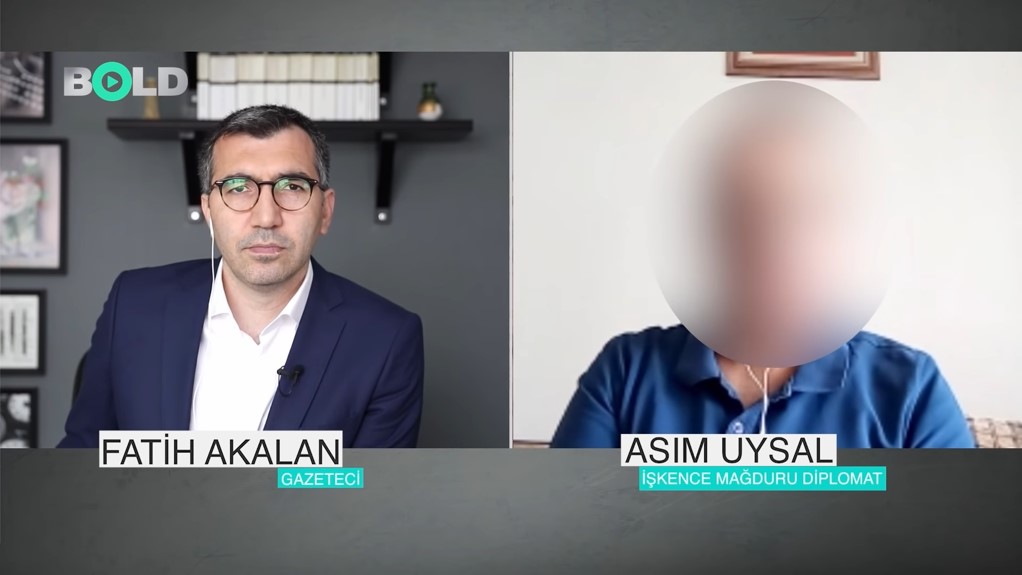 A documentary that premiered on the Bold Medya news website’s YouTube channel on Sunday revealed the plight of former diplomats summarily dismissed from the Turkish foreign service in the aftermath of a failed coup attempt in July 2016 and tortured at the Ankara Police Department in May 2019, the Stockholm Center for Freedom reported.

According to one of the victims — Asım Uysal — whose real name, face and voice were hidden for security reasons, during the time they were held at the organized crime unit (KOM) of the Ankara Police Department they were taken into unofficial interrogation sessions called “interviews,” where their lawyers were not allowed.

“During the interviews, we were forced into confessing that we were affiliated with the Gülen movement,” the former diplomat says. “We were verbally abused and threatened. Using very vulgar language, they told me what would happen to my wife and daughter if I were to be arrested. They claimed that I had the blood of police officers killed at the Ankara Police Department during the abortive putsch on my hands.”

According to Uysal, there was no physical torture or abuse in the first week of their detention. Yet, things started changing at the end of the first week after the police couldn’t get what they wanted. They started targeting specific individuals and took them out of their cell several times a day.

“On either the seventh or eighth night of our detention a colleague was taken from our cell past midnight,” Uysal says. “He said they put a sack on his head and took him to a dark room.”

The victim told them they beat him and told him to confess his links to the Gülen movement and to give names. The officers were telling each other to be careful not to leave any marks when beating him. When they couldn’t get a false confession, they started undressing him.

The victim didn’t tell Uysal the rest of the story so he says he doesn’t know how far they went. He heard similar stories from two more of his former colleagues.

Following the coup attempt, the government declared a state of emergency and carried out a massive purge of state institutions under the pretext of an anti-coup fight. More than 130,000 civil servants were summarily removed from their jobs for alleged membership in or relationships with “terrorist organizations” by emergency decree-laws subject to neither judicial nor parliamentary scrutiny.

The Ministry of Foreign Affairs was among the institutions that were hit the hardest by the purges. According to then-ministry spokesperson Hami Aksoy, 606 career diplomats — around 30 percent of the Turkish diplomatic corps — had been dismissed as of December 2019.

On May 26 Peoples’ Democratic Party (HDP) deputy and human rights defender Ömer Faruk Gergerlioğlu posted a tweet saying there were serious allegations of torture of former diplomats, including rape by batons.

Following the allegations, the Ankara Bar Association conducted an investigation and talked to the detainees. In their report the bar association said the victims’ statements “confirm that the individuals were subjected to blows, torture and ill-treatment.”

Although most of the diplomats were dismissed in 2016, they were only detained in May 2019. This led to speculation that they were tortured to get statements incriminating former foreign minister Ahmet Davutoğlu about the ministry’s entrance exams held during his tenure. Davutoğlu was working to establish a new political party at the time of their detention.

Despite the credible allegations and the bar association’s report, however, on August 6, 2020 the Ankara Chief Public Prosecutor’s office said there were no grounds to prosecute the case.

“It was really easy to refute our claims if we were lying,” Uysal said. “It would be enough to share CCTV footage from the cells and corridors.”