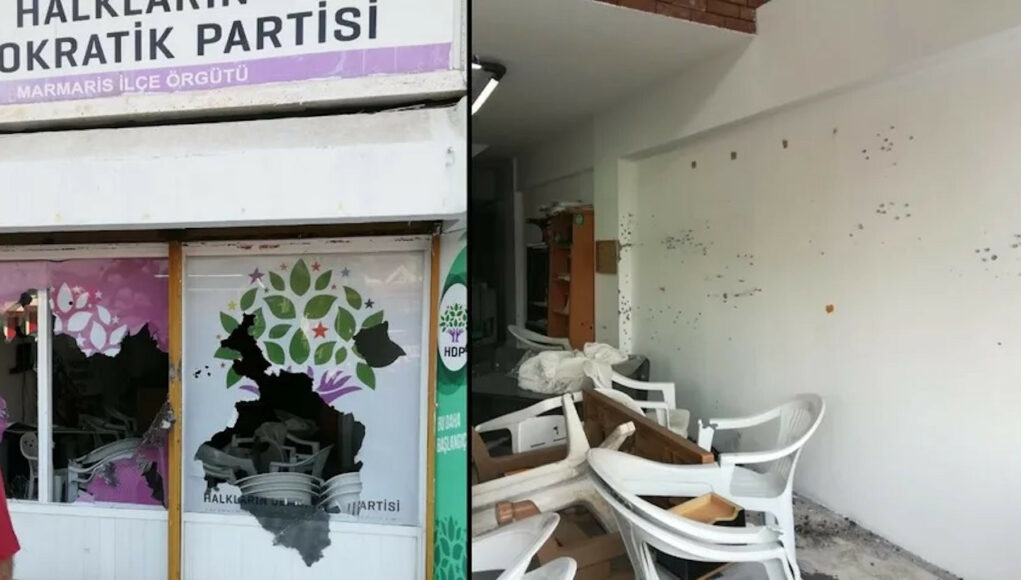 The attacker, a 28-year-old identified only by the initials A.T.D., fired rifle shots at the office at around 6 a.m. He was taken into custody and his weapon was seized.

No one was in the Peoples’ Democratic Party (HDP) office at the time of the attack, but the building and its contents sustained damage.

HDP office in Mugla was the target of an armed attack.

Guven Gokmen, HDP Marmaris District Co-Chair: "We know the forces behind this attack and want to see them exposed to the public".#DenizPoyraz #HDPHalktir https://t.co/LAETVd5xJI

The gunman, who has a criminal record, was charged with causing material damage in 2018 for a similar attack on a party office.

Güven Gökmen, the HDP Marmaris district co-chair said, “We know the forces behind this attack and want to see them exposed to the public.”

Pro-government media outlets reported that the assailant had mental problems and was receiving psychological treatment, attracting criticism on social media as an attempt to cover up the motivation behind the attack.

Prominent lawyer and human rights activist Eren Keskin said the official media immediately reported that the assailant had mental problems. She said they should stop acting so quickly and let people think about who was actually behind the attack.

The Marmaris incident is the second recent assault on an HDP office. Last month a party office in İzmir was also the subject of an attack in which 38-year-old party employee Deniz Poyraz was killed.

The attacks come at a time of increased pressure on the party, which is accused of links to the outlawed Kurdistan Workers’ Party (PKK), facing a closure case on terrorism charges and when hundreds of its politicians including two former co-chairs are behind bars on politically motivated charges.

Turkish President Recep Tayyip Erdoğan and his ruling Justice and Development Party (AKP) as well as their election partner, the far-right Nationalist Movement Party ( MHP), have long portrayed the HDP as the political front of the PKK. The party denies links to PKK and says it is working to achieve a peaceful solution to Turkey’s Kurdish problem and is only coming under attack because of its strong opposition to Erdoğan’s 18-year rule.