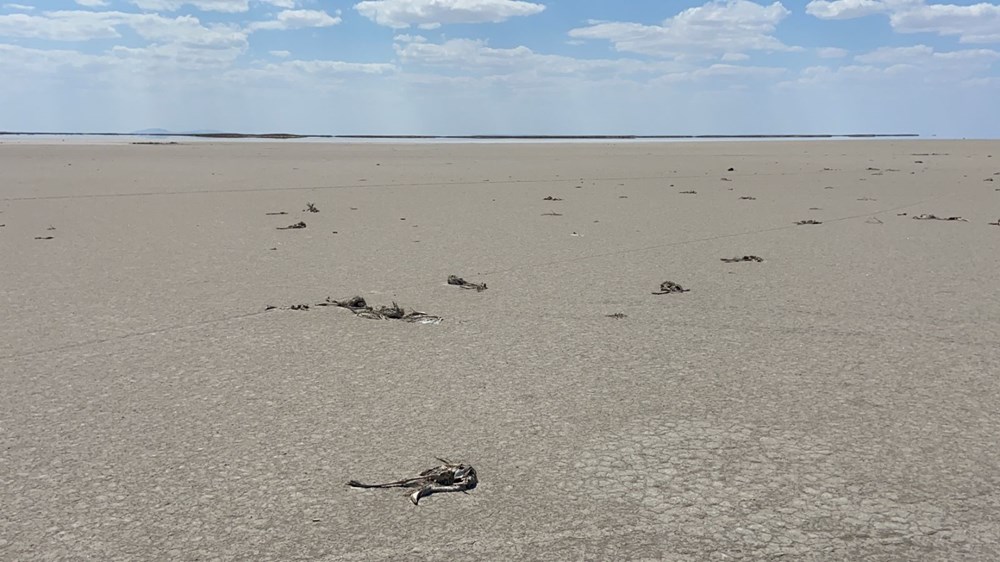 Hundreds of flamingos chicks died in Lake Tuz (Tuz Gölü) after locals built barriers in streams that feed the lake, which serves as a temporary habitat for migratory flamingos, leaving the birds without water, Turkish media outlets reported.

Photographer and bird watcher Fahri Tunç was shocked to see the dead bodies of hundreds of young flamingos at the bottom of the lake, which had dried up.

Noting that 5,000-10,000 chicks hatch every year in Lake Tuz, Tunç said: “This year, 5,000 chicks hatched. However, most of the young flamingos died due to declining water levels and shrinking foraging areas as villagers built barriers in streams bringing water to the lake. This amounts to a massacre.”

Lake Tuz, located within the boundaries of Konya, Ankara and Aksaray provinces, has no outlet. Migratory birds stop at the lake in spring or summer during their annual migration.

Home to 20,000-22,000 flamingos every year, Lake Tuz is regarded as a haven for flamingos. Flamingos hatch their eggs at the lake before flying to warmer climes with their young ones in fall.

Tunç attributed the bird deaths to aggressive irrigation practices in the region, stressing that water flow from major streams feeding the lake had been halted due to barriers erected in them by villagers.

“Not a single drop of water comes to Lake Tuz from these streams, and animals are deprived of drinking water and feeding areas. I call on the authorities to act. Thousands of chicks have died in this region. Tomorrow, we will have no world to show our kids. We will all be responsible for it,” he said.

Erhan İçöz, a geological engineer, told the Sözcü daily that misguided agricultural irrigation is the main factor for the drying up of Lake Tuz.

“Nature has a balance. If you use an excessive amount of water without taking this balance into consideration, it will soon start to diminish and nutrients in the lake will decline. There are hundreds of boreholes drilled with or without approval in the Konya plain. The excessive use of groundwater is the reason for widespread potholes in the region as well as for the decreased water level in the lake,” he said.

Meanwhile, the Konya Governor’s Office on Wednesday announced in a statement that they have launched an investigation into the flamingo deaths in Lake Tuz.

“A committee of experts set up by our office is conducting studies on the factors that have adverse effects on the life cycle of flamingos as well as additional measures that can be taken,” the statement said.

The ruling Justice and Development Party (AKP) is harshly criticized for ignoring environmentalists’ concerns and allowing damage to the environment by pressing ahead with giant construction projects.

Its critics argue that the AKP aims to generate profits for its close circle in many of its projects which eventually damage the environment and ignore ecological concerns.