The wife of the president of a prestigious school network in Kyrgyzstan who went missing in Bishkek on the evening of May 31 said on Sunday that her husband is currently being held in the Turkish Embassy in Bishkek and is being forced to sign a document renouncing his Kyrgyz citizenship.

He will subsequently be taken back to Turkey, where he will face prosecution, Reyhan İnandı, the wife of the educator Orhan İnandı, said in a video she posted on Twitter.

İnandı, the founder and president of the Turkish-Kyrgyz Sapat school network operating in Kyrgyzstan, went missing in Bishkek on Monday evening and is feared to have been abducted by Turkey’s National Intelligence Organization (MİT) due to his alleged links to the Gülen movement.

İnandı left his house at around 8 p.m. on Monday for a meeting at a nearby café. He was last contacted by a friend at around 9 p.m. Attempts by his family to contact him all failed. İnandı’s Toyota Lexus was found parked in an area some eight kilometers from his house at around 3 a.m. on Tuesday. The car’s doors were open and its tires were flat. His family immediately notified the Kyrgyz police about the disappearance, demanding an urgent investigation to ascertain his whereabouts.

In a joint letter, UN rapporteurs accused the Turkish government of engaging in the systematic practice of state-sponsored extraterritorial abductions and forcible returns to Turkey, with at least 100 Turkish nationals from multiple states including Afghanistan, Albania, Azerbaijan, Afghanistan, Cambodia, Gabon, Kosovo, Kazakhstan, Lebanon and Pakistan removed to Turkey.

According to recent official statements by its interior ministry, Turkey has sent 800 extradition requests to 105 countries since the coup attempt, and some 110 alleged members of the Gülen movement have been brought back to Turkey as part of the government’s global campaign.

Since it started in 2014 Hakan Fidan, head of MİT, has been in charge of the campaign at the behest of Turkish President Recep Tayyip Erdoğan

However, İnandı’s case is different than the others since for the first time MİT might have been trying to abduct a citizen of another country from his country of nationality.

İnandı’s alleged abduction by Turkey prompted many Kyrgyz including students and parents from the Sapat schools to stage protests, demanding the educator’s release. The protests mostly take place in front of the Turkish Embassy in Bishkek, where İnandı is believed to be held. The alumni of the Sapat schools who also take part in the protests announced their offer of a reward on Friday during protests in front of the Kyrgyz Parliament.

“We alumni got together and made a decision. A reward of $1 million will be given to whoever finds Mr. İnandı,” one of the alumni announced.

Other alumni of the Sapat schools who live in Chicago also held demonstrations there protesting İnandı’s alleged abduction.

Being held at the Turkish Embassy

“I have acquired information that my husband is being forcibly held in the Turkish Embassy. They are forcing Orhan İnandı to sign a paper renouncing his Kyrgyz citizenship. They will subsequently abduct him from Kyrgyzstan. The current administration in Turkey has previously abducted educators and taken them back to Turkey on false accusations that they are terrorists. My dear Kyrgyz compatriots, Orhan İnandı is a Kyrgyz citizen. His heart is with the Kyrgyz people. I implore you to not let one of your fellow citizens be abducted to Turkey in such an inhumane manner,” Reyhan İnandı said in her statement.

Turkish Minute sources confirm the information provided by Reyhan İnandı, as they, on condition of anonymity, have stated that upon his initial abduction, İnandı was taken to the Turkish Embassy for interrogation and that a private jet is being kept ready for him in an unused hangar of the Bishkek airport. Sources say that due to the round-the-clock protests around the embassy that began immediately after İnandı went missing, his abductors have not been able to move the educator off the premises.

No entry or exit from the embassy due to protests

Hundreds of students, activists and educators have started to keep watch at the doors of the Turkish Embassy to prevent possible attempts to spirit İnandı away. Upon searches conducted of vehicles going in and out of the embassy, Turkish diplomats halted the entry to and exit from the embassy.

Reyhan İnandı’s claims bring back memories of slain Saudi dissident Jamal Khashoggi, who went to the Saudi Consulate General in İstanbul in October 2018 to deal with paperwork regarding his upcoming marriage and was attacked, killed and dismembered by a team ordered to take him back to Saudi Arabia.

After Turkey fails to secure legal extradition, authorities resort to illegal covert operations. Targeted individuals are placed under “around-the-clock surveillance, followed by house raids and arbitrary arrests in undercover operations by law enforcement or intelligence officers in plainclothes,” according to a joint letter written by four UN rapporteurs.

The UN report is in keeping with the allegations of Zabit Kişi, 48, who said he was tortured for more than three months after being abducted from Kazakhstan by Turkish intelligence agency MİT.

In September 2017 a MİT team forcibly removed him from the Almaty airport and put him on a plane he described as painted with a camouflage pattern.

A minivan picked him up after landing at the airport in Ankara, and he was driven to what he described as a freight container where he was subjected to torture and abuse for more than three months. The three-square-meter container had no window, and he could barely move around. “It was like a tomb to me,” he recalled. “My only escape from there was my death. I never imagined death could seem so pleasant.”

The MIT officers stripped him naked, slammed him against the wall, attempted to sodomize him with a hard object, electrocuted and crushed his toes and threatened to kill him. He had no access to legal representation or any other contact with the outside world.

Kişi turned up in an Ankara court on January 18, 2018, having drastically lost weight and claiming he was tortured. He was later sentenced to 13 years, six months in prison on terrorism-related charges. 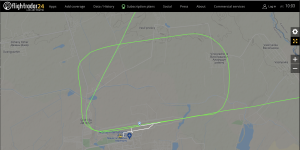 Subsequently, at 12:05 PM UTC, it moved to the Issyk-Kul region to wait there for half an hour and then returned to Bishkek. At 2:30 PM UTC, it took off, circling Bishkek twice, and landed back at Bishkek’s Manas International Airport.

According to Turkish Minute sources, a 10-man team from Turkey arrived in Bishkek before İnandı went missing. They met with some crime groups in the country and left, the sources claim.

Fidan has a history of working with mafia groups to render Gülen movement members from various countries. Mafia groups kidnapped Gülenists in Kazakhstan, Moldova, Malaysia and several African countries and handed them over to MİT operatives.

Kyrgyz President Sadyr Japarov ordered the State Committee for National Security and the Ministry of Internal Affairs to conduct an extensive search to locate İnandı, according to a statement on the presidency website on Tuesday.

According to the statement issued by the local police, İnandı’s car was found with its doors open on June 1 at 4:20 a.m. local time. Police said an investigation team comprising experienced inspectors was formed to locate İnandı.