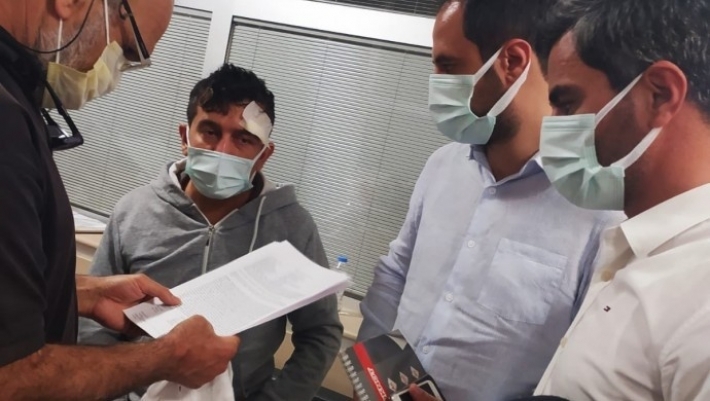 A Kurdish family from northern Iraq’s Erbil province was attacked on Thursday in an apparent hate crime while they were visiting Turkey’s southern Mersin province, the Stockholm Center for Freedom reported.

The family, who were on their way to the neighboring city Adana, was beaten by a group of people who were making nationalist gestures. One man, Musthtaq Mahmood Kareem, was severely injured and was taken to the hospital.

In his statement to the gendarmerie, Kareem said he collided with another car on his way to Adana. He said some people from the other car came up to them as he was checking for damage. “They said this was Turkey, their country, and asked me what I was doing here,” he said.

Kareem added he did not understand the rest of what they said as they began to hit him. He said the rest of his family was in the car and he pleaded in English for them to stop. “That is all I remember. I opened my eyes in the hospital,” he said.

According to a doctor’s report, Kareem suffered multiple bone fractures.

Cihan Kutluk, who witnessed the incident, said he saw a family being beaten by four people with stones. “They were hitting the older man and a 12-year-old boy on the head with stones,” he said. “I saw the older man hit the barrier as the group tried to throw him off the edge of the road.”

Kutluk said he first thought the struggle was simply a roadside disagreement about the right of way. “However, I heard them cursing the Kurds and saw them making nationalistic gestures.” Kutluk said he called an ambulance for the older man and went to a police station to testify.

According to Kutluk one of the perpetrators turned around and told all the witnesses that he would be “waiting to kill anyone who testifies about the incident.” Continuing to curse Kurds, the perpetrator left the scene in his car.

Video recordings of the incident were shared on social media, after which the gendarmerie started an investigation. Three people were detained and two of them were arrested. The suspects said the fight was about a traffic incident, denying any racist motives.

The Mersin governor’s office published a statement on its website also denying claims that the incident was a hate crime.

However, the Mersin Bar Association confirmed the perpetrators had made racist remarks and gestures. In a statement published on their website, they said multiple eyewitnesses confirmed it was a racist attack. The statement also said such hate crimes were unacceptable and that the bar association would closely follow the investigation.

According to a report prepared by the Diyarbakır Bar Association in southeastern Turkey, the Kareem family was indeed attacked in a hate crime. The bar said the family was visited by the district police chief and police officers although the incident occurred within the jurisdiction of the gendarmerie and not the police. It said this was an intimidating experience for the family.

The district governor also visited the hospital, which indicated that the authorities wanted to influence the course of the investigation, the report said.