A total of 404 civilians have been shot dead by the police since a law was amended giving police officers more power in 2007, the Stockholm Center for Freedom reported citing Baran Tursun Foundation.

According to the report, making use of such concepts as “reasonable suspicion” and “judgement call,” the police killed more than 400 individuals, most of whom would only have been charged with misdemeanors. In these cases, there were no clashes with the police nor violence endangering the lives of others.

The report says this was in part caused by a failure to give adequate training to police officers on how to use their authority to carry arms under certain circumstances following amendments made to the laws on police powers in 2007 and 2015. The 2007 amendment gave the police the authority to stop suspects and conduct ID checks, while the 2015 amendment defined the concepts of “reasonable suspicion, foresight and judgement call.”

Another factor that contributed to the high number of deaths was the unclear language of the amendments, the report said.

The report, “They Didn’t Have to Die,” was written by Dr. Günal Kurşun and human rights activist Mehmet Tursun and received financial support from the European Union. 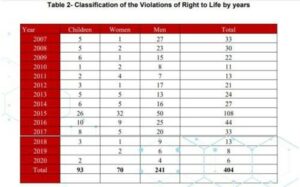 The report included recommendations such as not allowing officers involved in killings to remain on active duty until the investigation is completed; in cases of unlawful killings, prosecuting officers for murder rather than lesser crimes; and handing over the crime scene investigation to the gendarmerie in cases of killings where police officers are involved.