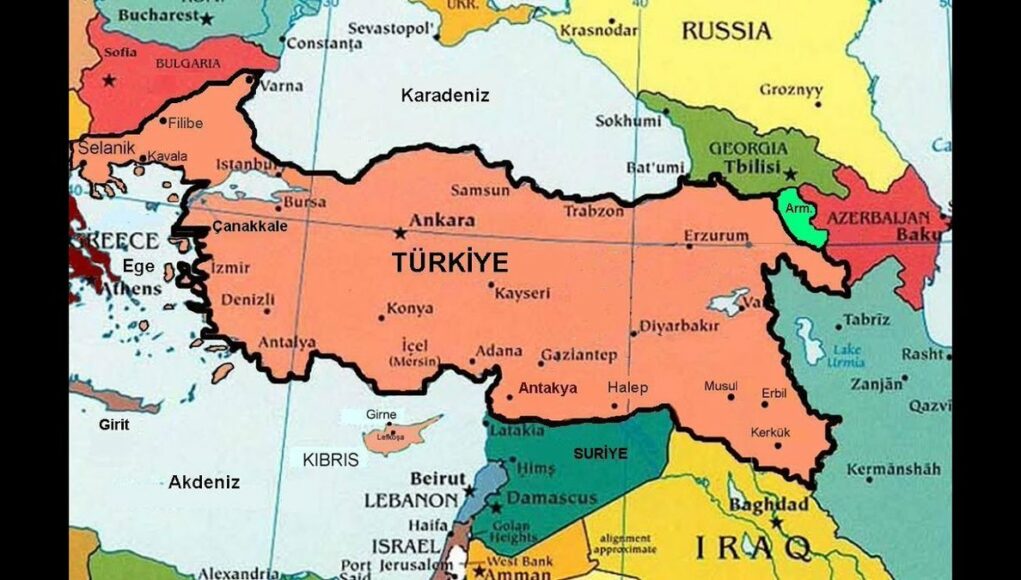 Misvak, the most popular ultra-Islamist humor magazine in Turkey, published a map of an enlarged Turkey last week with a comment that reads, “If a map is needed, we will draw it!”

Misvak’s “new Turkey map,” which, in addition to actual Turkish territory contains part of the Balkan Peninsula as well as northern Iraq, received differing reactions in the Turkish media and started a new debate about the Justice and Development Party (AKP) government’s neo-Ottoman and expansionist foreign policy.

Dr. Nikos Michailidis, assistant professor of anthropology and Mediterranean studies at the University of Missouri–St. Louis, thinks Misvak’s map is a standard propaganda tool of the expansionist ideology promoted by the extremist, far-right movement in Turkey.

“Unfortunately, this is not a marginal movement, but a mainstream one. These conceptions are not only being represented in the parliament with at least three parties, but they are also everywhere in the state bureaucracy. With these kinds of maps and the relevant rhetoric, they express a peculiar Islamo-nationalist and imperialist nostalgia that threatens all its neighbors, the peace and the stability of our region,” Michailidis told Turkish Minute in a phone interview.

Misvak, in which Islamism is presented as the primary ideological position, does not hesitate to share the AKP’s official discourse and moreover contribute to nurturing the AKP’s “hegemonic projects.” In addition, intellectuals, protesters, opposition political parties, feminists, modern women, LGBTQ+ and the politicians of foreign countries are always portrayed as “enemies of Turkish society.” These groups are invariably dehumanized and demonized by Misvak, where racist, misogynistic, homophobic, anti-Semitic and anti-Christian representations are commonplace.

Professor Mehmet Efe Çaman, from the political science department at Memorial University of Newfoundland, agrees that the Misvak caricature propagandizes neo-Ottomanism and expansionism and thinks the map is a response to the pope’s visit to Iraqi Kurdistan.

“This cartoon is not a coincidence. Islamist-nationalist circles that hate the Kurdistan idea take the pope’s visit as a provocation. Kurds’ sovereignty and Kurdistan’s international acknowledgement are their worst nightmare. In this sense the cartoon is a message — ‘Do not play a game with us, we are Ottomans and very glorious! We will take that land from enemies!’ — that they try to say in their own language,” Çaman told Turkish Minute.

According to Dr. Michailidis, spreading militarist, expansionist propaganda inside the country is a sign that the state does not want to compromise with the Kurds and find a democratic solution through dialogue for the “Kurdish problem” in Turkey and northern Iraq.

“They are sending a message, basically to Kurds and Greeks, which is ‘We are ready to re-conquer you.’ At the same time, they wanted to lift the spirits of their voters, who are upset with the pope’s Kurdistan visit, and show how strong they are.”

In October 2020 Turkey had vowed to take “legal, diplomatic action” over a cartoon of Turkish President Recep Tayyip Erdoğan in French magazine Charlie Hebdo. The cartoon depicted Turkey’s president lifting the dress of a veiled woman. Turkish prosecutors launched an official investigation into the satirical magazine. Tensions between France and Turkey were high after President Emmanuel Macron pledged a tougher stance against radical Islam. Erdoğan also had called on Turks to boycott French goods and said Macron needed a “mental examination.”

Erdoğan has zero tolerance for European humor magazines, but Misvak, which had half a million followers on Facebook and around 94,000 on Twitter as of March 2021, feels free to frame Christians, Kurds and Alevis as “terrorists and infidels” in Turkey.

Misvak’s discourse has similarities with AKP policies, and the ideologies presented in the magazine are mostly Islamism, nationalism and neo-Ottomanism.

According to Professor Çaman, Turkish society never had a confrontation with Ottoman expansionism, and Turks do not understand that the conquered territories were “somebody’s land.”

“Greeks, Serbs, Bulgarians, Albanians, Macedonians, Romanians and Hungarians in the West, and Arabs, Kurds, Assyrians and Armenians in the East, there is a perception that all of them had to live under the rule of the Turks. According to the Turks, Turkish rule was the best thing that ever happened to other people. Turks had the right to establish their nation-state, but others did not.”

“This rhetoric is not only promoted by the AKP but also by the Nationalist Movement Party [MHP] and by members of other parties who pretend to be ‘democratic.’ It seems that this policy is a state policy, not just that of one party. The Turkish regime, instead of engaging in dialogue with the Kurds, accepting them as equal citizens and giving them their rights, uses military force to exterminate what it considers its opponents,” said Michailidis.

Misvak, with its jihadist and neo-Ottomanist caricatures, also serves as a propaganda tool for the AKP and does not aim to attract the support of those groups that are framed as “the other” who are systematically stigmatized as “enemies” of the nation by the magazine.

Dr. Gökhan Bacık, who teaches in the department of politics and European studies at Palacky University in the Czech Republic, thinks Turkish society is obsessed with the idea of territory. “They believe if you rule a larger territory it means your power is expanded According to this belief the collapse of the Ottoman Empire was a huge injustice for Turks, and now Islamists are trying to ‘fix’ the history and revive the Ottoman Empire,” Bacık told Turkish Minute.

According to Bacık, on the other hand, Turkey is now trying to adapt to the Biden administration, which is a tough job. “The Turkish economy is in a desperate situation, and the AKP has failed in Syria. So there is no other choice, they will try to adapt, but if they remain unable to find parallels with the US, they will launch an aggressive policy towards the US and become anti-American, which is a typical Islamist reaction,” says Bacık.

Professor Çaman thinks owning more land is the only measure of success or poverty in Turkey. “The absence of democracy and the rule of law does not worry people, and this is a tragedy. Let’s put aside Misvak’s cartoon and look at Turkey. Turkey is becoming a cartoon itself, and this is the biggest problem today.”

Dr. Michailidis emphasizes Turkey’s aggressive foreign policy and the illegal practices in the country. “Turkey is currently attacking all its neighbors and refuses to negotiate about maritime boundaries in the east Mediterranean based on international law. The regime is destabilizing the region. Turkey has a militarist and expansionist agenda; however, Greece is not Syria or Iraq, and nobody in the eastern Mediterranean will ever accept these Turkish nationalist fantasies. The regime is putting Turkey into great adventures that remind me of the post-World War I period,” he said.