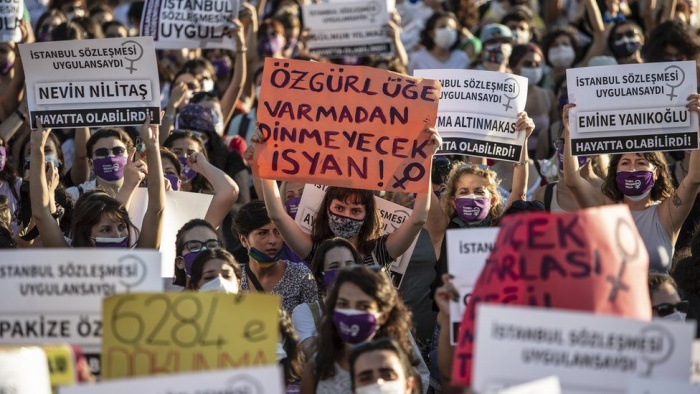 Turkish President Recep Tayyip Erdoğan early on Saturday issued a presidential decree pulling Turkey out of the world’s first binding treaty to prevent and combat violence against women despite calls from campaigners who see the pact as key to combating the country’s rising domestic violence, prompting outrage among the Turkish public.

Thousands of social media users, including women’s rights associations’ members, politicians, journalists and celebrities, took to Twitter when rumors of Turkey’s withdrawal began to circulate on social media late on Friday, expressing their reactions under the hashtag #AklınızdanBileGeçirmeyin (don’t even think about it).

“Women in Turkey, no matter what ideology they represent, know that the İstanbul Convention protects their right to life. Can a presidential decree make them forget about it?” Gülsüm Kav, director of the We Will Stop Femicide Platform, said in a tweet early on Saturday.

“It is clear that this decision will further encourage the murderers of women, harassers and rapists. … We will not give up our basic, inviolable, inalienable and indispensable rights and liberties. A world free of violence is possible. We reject withdrawing from the İstanbul Convention,” the Women’s Coalition – Turkey declared in a written statement.

“It is so sad to see Turkey, where we see reports of domestic violence every day, being pulled out of İstanbul Convention in the middle of the night. This move disregards women’s years-long fight [for rights and freedoms],” İstanbul Mayor Ekrem İmamoğlu from the main opposition Republican People’s Party (CHP) tweeted.

CHP İstanbul provincial executive Canan Kaftancıoğlu underlined that throughout history, women’s rights movements had grown stronger while instances of one-man rule had ended. “Therefore, we won’t be upset by this. We will take our rights, which are usurped by way of an operation carried out in the middle of the night, back by force,” she added.

“The İstanbul Convention protected women, withdrawal from it will protect killers [of women]. No matter what you do, women will not stop fighting,” the Workers’ Party of Turkey (TİP) tweeted, addressing Erdoğan and his Justice and Development Party (AKP) government.

Journalist Hayko Bağdat accused Erdoğan and his government of being violent and savage because they don’t want women to be free and protected from violence. “They don’t feel close to women, but their killers,” he argued.

“They disregard women who fight for rights, those who took to the streets for justice and those who paid a price for democracy. There’s nothing much a tweet can do, but it is intended to show which side we are on,” journalist İrfan Değirmenci said, referring to the weeks-long “Justice March” from Ankara to İstanbul initiated by CHP leader Kemal Kılıçdaroğlu in protest of the ruling AKP in June 2017.

Famous actor Mert Fırat, the goodwill ambassador of the United Nations Development Programme (UNDP) in Turkey, described the convention in a tweet as a “revolution” and “one of the most valuable gains” for the country. “This decision is of no use for anyone. Last night was a historic moment [for Turkey],” he further stated.

“This is horrible. Shame on you,” famed Turkish novelist Elif Şafak said in a tweet addressing the AKP government. “This is a country where three women are killed daily and femicide is a huge crisis,” she said.

The İstanbul Convention, which requires governments to adopt legislation prosecuting domestic violence and similar abuse as well as marital rape and female genital mutilation, has been criticized by conservatives who argued that it damages family unity, encourages divorce and that its references to equality were being used by the LGBT community to gain broader acceptance in society.

Erdoğan has been accused by many of taking mostly Muslim but officially secular Turkey on an increasingly socially conservative course during his 18 years in power.