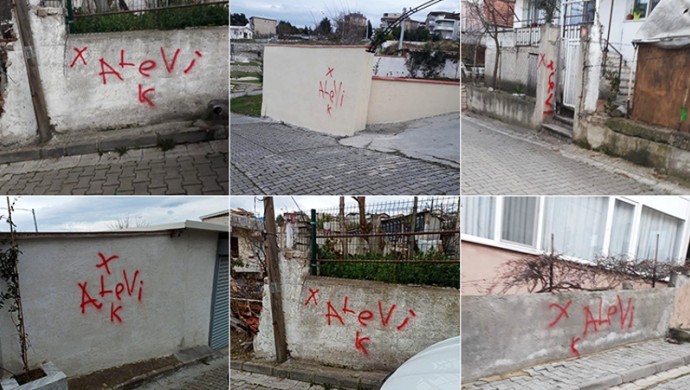 Five houses belonging to people from the Alevi faith were marked with red X’s and the word “Alevi” in the western province of Yalova, increasing concerns among the Alevi community in the region, Turkish media outlets reported.

The incident took place in the Bağlarbaşı neighborhood where unknown individuals defaced the walls of the five houses with red spray paint.

An investigation was launched by the police to find the perpetrators after the families reported the marks on their houses.

Mehmet Gürel, Yalova district head of the main opposition Republican People’s Party (CHP), condemned the incident in a statement, saying he was ashamed of the fact that such people live in Yalova.

The marking of houses or buildings belonging to Alevis, who are estimated to account for 16.5 percent of Turkey’s total population of 83 million, is a frequent occurrence. They are the second-largest Islamic sect in Turkey, with Sunni Hanafi Islam being the largest.

There are long-standing tensions between the Alevi and Sunni communities in Turkey. During the Turkish republican era, hundreds of Alevis were killed in pogroms, which many now believe were masterminded by groups inside the state, in the cities of Çorum, Yozgat and Kahramanmaraş in the 1970s. Thirty-four Alevi intellectuals died in a fire in 1992 at the Madımak Hotel in Sivas. In other incidents, such as in İstanbul’s predominantly Alevi Gazi neighborhood in 1995, Alevis were targeted by individuals armed with machine guns.

Turkey has long denied Alevi demands for state recognition, and Alevi houses of worship, known as cemevis, are not officially recognized by the state, hence given no financial assistance.