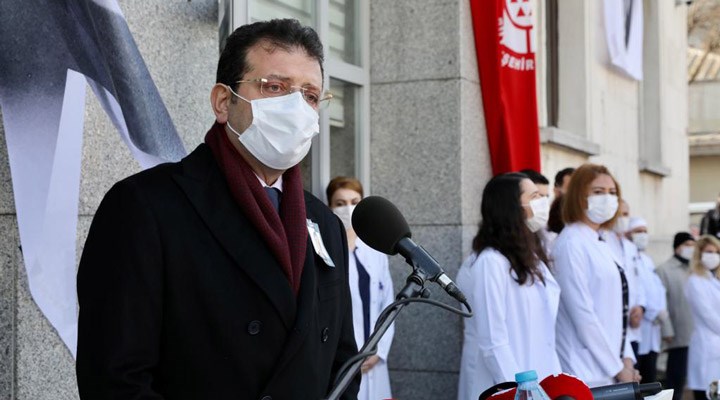 İstanbul Mayor Ekrem İmamoğlu has called on the Turkish government to declare a full lockdown to bring the soaring number of coronavirus infections in the country under control, saying there has been no slowdown in the COVID-19 death toll despite some measures taken by the government.

İmamoğlu’s remarks came on Tuesday during a memorial service for Dr. Ümit Erdem, who worked for the municipality for 30 years and recently died of coronavirus.

“Can there be anything more difficult for a mayor than a lockdown? Let’s close down the city for two or three weeks. It’s difficult, but experts say we need to limit people’s movement to reduce the spread [of the disease]. If necessary, we should conduct tests in people’s homes, and we need to grow the tracing network,” said İmamoğlu.

The mayor said the municipality keeps daily tallies of people who die and that there has been no slowdown in the number of coronavirus deaths, claiming that the death toll in İstanbul is much higher than the official figures.

The number of the coronavirus infections climbed to yet another record on Monday as the health ministry reported 32,137 new cases and 203 deaths over the last 24 hours. The country’s coronavirus death toll has reached 15,103 since March.

He said 11,500 people died in İstanbul in November, compared to some 6,000 last year and in previous years. He said, however, all the deceased were being buried in compliance with religious rituals and that there was no disruption in burial services thanks to the extraordinary efforts of the funeral workers.

Turkish Minute - January 20, 2021
Facebook Twitter Youtube
© Designed by Increases
Go to mobile version
We use cookies and similar methods to recognize visitors and remember their preferences. We also use them to measure ad campaign effectiveness, target ads and analyze site traffic. By tapping ‘accept,’ you consent to the use of these methods by us and third parties. Accept