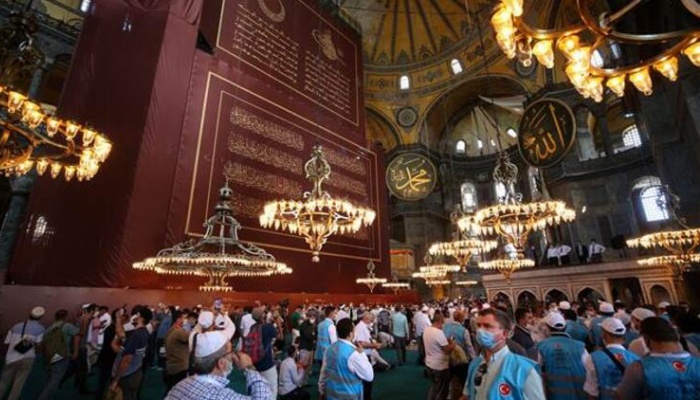 Prayers at Hagia Sophia sparked new coronavirus cases in Turkey as preventive measures were not strictly followed during the congregational worship, according to health professionals, the Arab News reported.

Around 350,000 people swarmed into the Hagia Sophia and the area around it on July 24 after the Byzantine-era landmark became a mosque again after functioning for decades as a museum.

Some of the 500 guests inside the mosque, including parliamentarians and journalists, have been diagnosed with the disease. There was a lack of social distancing and mask wearing.

The number of new daily COVID-19 cases began rising and exceeding 1,000 just after the Eid Al-Adha holidays. The government’s decision to withhold figures about the number of patients in intensive care and those who are intubated has increased concern about the country’s coronavirus reality.

Health professionals contacted by Arab News said the pandemic had worsened in the last month and that the opening of Hagia Sophia for prayers without appropriate and tough precautions in place was a reason for the surge.

“Following the opening of Hagia Sophia, we also heard of many cases among politicians,” a doctor who preferred to remain anonymous told Arab News. “But it is because they go through a regular screening every three days in order to make sure they are healthy.”

The doctor, who works in a hospital in the central Anatolian province of Sivas, added: “If ordinary citizens also get a similar test, the real case rates will be higher. If things go on like this, there will be nobody in the hospital who is not infected. … There might even be a shortage of medical personnel who either resign from the job or become sick.”

Dr. Ergin Kocyildirim, a pediatric cardiothoracic surgeon and an assistant professor in the Department of Cardiothoracic Surgery at the University of Pittsburgh’s School of Medicine, said a visit from President Recep Tayyip Erdoğan to the Hagia Sophia the following week made it look like social distancing rules were hard to uphold inside the landmark due to the large crowds who wanted to see the president or take pictures.

“I believe those images made many health care professionals feel upset, as a sudden step like this might ruin the months-long efforts to contain the virus. While trust takes time to be established, it can be lost quickly,” he added.

To date 5,858 people have died from the virus in Turkey, according to official figures, and the country is not yet on the list of safe travel countries regularly updated by the EU.