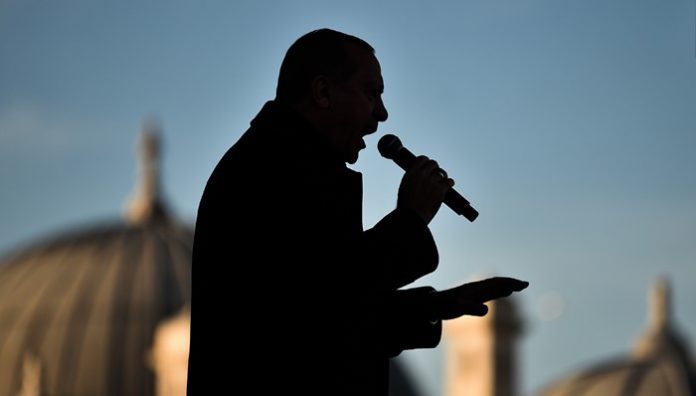 Two television channels in Turkey have been hit with five-day bans and the threat of permanent suspension, in a move slammed by press freedom organizations, according to the Middle East Eye.

İlhan Taşçı, a member of RTÜK, tweeted the decision on Wednesday, saying that viewers tuning in to the channels would “only see black screens” for five days.

He added that the two outlets would lose their broadcast licenses entirely if they were penalized again in future.

An investigation was launched into TELE 1 last week after a television host criticized Ottoman Sultan Abdulhamid II, who ruled from 1876 to 1909.

Merdan Yanardağ accused the former ruler of repressing progressives and reformists in the Ottoman Empire in the 19th century and described him as a “despicable dictator who was a slave to imperialism.”

The legacy of Abdulhamid II is highly controversial in Turkey today. He is lauded by President Recep Tayyip Erdoğan and his supporters as a strong pan-Islamic ruler who attempted to salvage the decaying Ottoman Empire, but leftists and secularists denounce his clampdown on the Ottoman parliament and attempts at liberal reforms, as well as for the massacres of Assyrians and Armenians that took place under his rule.

The RTÜK decision was harshly criticized by the Committee to Protect Journalists (CPJ).

“The Radio and Television Supreme Council should not function as a censorship tool for the government, and Turkey should learn to tolerate the existence of whatever critical voices are left in the broadcast media,” said CPJ Europe and Central Asia Program Coordinator Gulnoza Said.

“Halk TV and TELE1 are two remaining pro-opposition broadcast outlets in a media landscape that has become predominantly pro-government. Their presence is vital for media plurality in Turkey.”