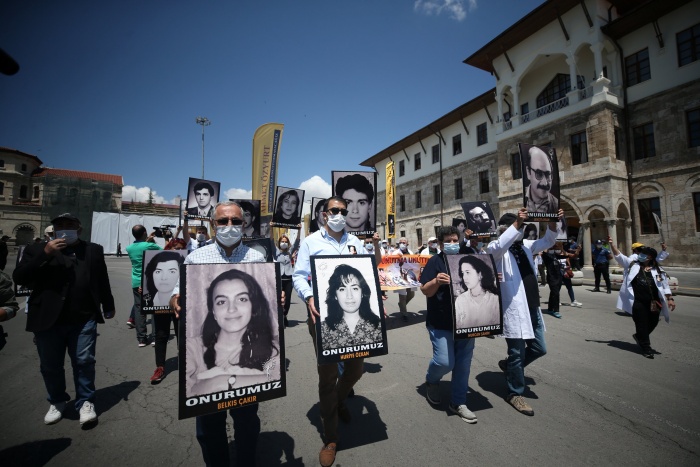 Thirty-three Turkish intellectuals who perished in a fire in 1993 inside the Madımak Hotel were commemorated in Sivas on Thursday, the 27th anniversary of the massacre, the Mezopotamya news agency reported.

The organizers of the commemoration reiterated their demand for conversion of the hotel into a “museum of shame.”

The attendees, including the families of some of the victims, said they were still waiting for justice.

In a controversial move President Recep Tayyip Erdoğan in February used his presidential power to pardon a man who was given an aggravated life sentence due to his role in the Sivas massacre.

A number of lawyers who defended the suspects in the massacre later became politicians in Erdoğan’s ruling party.

On July 2, 1993 an angry mob torched the Madımak Hotel, killing 37 people, mostly artists and scholars of the Alevi sect, who were there to attend a conference hosted by the Pir Sultan Abdal Culture Foundation (PSAKD), an Alevi organization.

In attendance was Aziz Nesin, a left-wing Turkish short story writer, hated among religious Sunnis in Turkey, who had become the target of attacks for attempting to translate Salman Rushdie’s controversial novel “The Satanic Verses” into Turkish.

A group of radical Islamists, having been provoked by several local political leaders, gathered in front of the hotel following Friday prayer and accused conference participants of being infidels.

Thirty-three attendees, two hotel staff members and two protesters died in the fire. Nesin was able to escape because the attackers initially failed to recognize him.