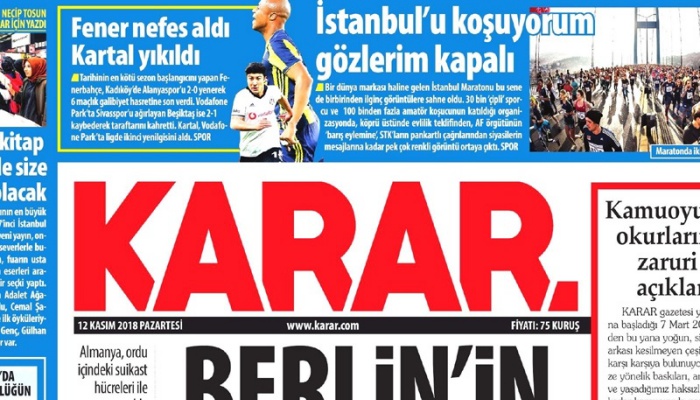 The Turkish Karar daily announced in its Monday edition that businesspeople and advertising agencies have been urged not to place ads in the newspaper, causing unsustainable financial problems.

“We would like to inform our readers in the hope that the embargoes and pressures we’ve been subjected to will soon end,” the statement said.

Turkish journalists on social media criticized Karar’s statement for failing to call it “government pressure on the media.”

Most of its editorial board members and columnists had previously worked for pro-government news outlets.

Many believe the birth of the daily was the outcome of a difference of opinion between President Recep Tayyip Erdoğan and former President Abdullah Gül along with former Prime Minister Ahmet Davutoğlu.

Gül was considering a run against Erdoğan in the presidential election of June 24 after Davutoğlu resigned in May 2016.

Karar is known for its criticism of the government from a conservative point of view.

“The pressure on us clearly violates the Turkish Commercial Code and other laws regulating competition. This is an open threat to freedom of the press, which is one of the foundations of democracy,” the statement said.