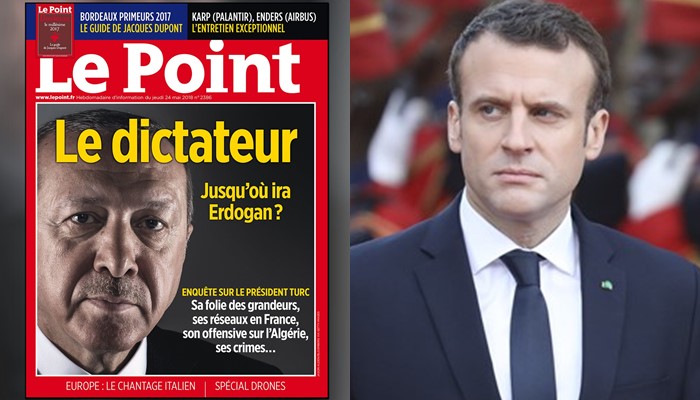 French President Emmanuel Macron on Monday strongly criticized the removal of cover posters of Le Point magazine from kiosk billboards by a group of Turks in Avignon, calling it a move by “enemies of freedom.”

“It is totally unacceptable for @LePoint posters to be removed from kiosks because they do not please the enemies of freedom in France or abroad. The freedom of the press has no price: without it, it is dictatorship,” Macron tweeted.

A video shared on social media on Friday evening shows a group of Turkish-speaking people having a discussion with the Médiakiosk workers who put the Le Point poster on the kiosk billboard in Pontet, Vaucluse, near Avignon. The workers then started to remove the poster.

The cover of Le Point with a photo of Erdoğan reads “The dictator. How far will Erdoğan go?”

Le Point said it requested that the promotional poster be returned to the display case, which it was two hours later, and the booth was placed under police surveillance, Euronews reported.

Another case of Le Point promotional posters being destroyed was reported in Valencia.

President Erdoğan’s spokesman, İbrahim Kalın, on Friday tweeted about Le Point’s cover: “A French magazine called President Erdoğan a dictator. We know these attacks. We know their goals. Our nation and all oppressed nations see what is going on. The days when Turkey took orders from you are over. You cannot bring those days back by calling [Erdoğan] a ‘dictator’.”

Burhan Kuzu, a senior member and deputy of Erdoğan’s ruling Justice and Development Party (AKP) on Sunday called Macron an “enemy of Turkey” and “enemy of Muslims,” along with other leaders including Israeli Prime Minister Benjamin Netanyahu, US President Donald Trump and German Chancellor Angela Merkel.