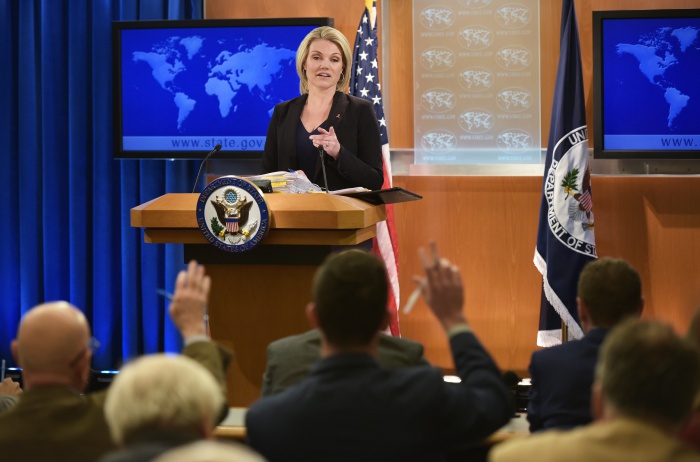 The United States has said some 140,000 people have been displaced by Turkey’s cross-border offensive to seize Syria’s Afrin district from Syrian Kurdish forces, adding that Washington has concerns about the resulting humanitarian situation.

Turkish troops backed by their Syrian allies seized Afrin in March after a two-month operation against Syrian Kurdish forces that Ankara says are linked to Kurdish militants fighting inside Turkey. Thousands of Afrin residents as well as those who had previously sought shelter there from fighting elsewhere in Syria fled Afrin in the face of the Turkish advance.

“140,000 people have been displaced from Afrin, and … as far as we can tell, they are not being allowed back in to their homes and communities,” US State Department Spokesperson Heather Nauert told a news briefing on Thursday.

“We have expressed grave concern about the humanitarian situation in Afrin over recent weeks and months. That remains a concern of ours today,” she said.

It was the first time a US official had publicly criticized Turkey for preventing people from going back to their homes.

“We call on all relevant actors operating in the northwest – that includes Turkey, that includes Russia, that also includes Syria – to provide access for international humanitarian aid organizations and to allow for people to come home,” Nauert said.

Tensions between NATO allies Turkey and the United States have risen over a number of issues in recent months, particularly over US backing for the Syrian Kurdish group that Turkish forces drove out of Afrin, but also Ankara’s shift towards Russia and spats over the arrest of US citizens and consular staff in Turkey.

Nauert was asked whether the administration supported a bill proposed in the Senate to block the sale of US F-35 fighter jets to Turkey due to Turkey’s worsening human rights situation and the purchase of Russian-made S-400 air defense missiles. She said the administration does not comment on legislation under discussion, “but I can tell you that we have had serious concerns about Turkey’s potential acquisition of the S-400 system.”

Turkish Foreign Minister Mevlüt Çavuşoğlu, following his first meeting with new Secretary of State Mike Pompeo in Brussels last week, said the purchase of the S-400s was a done deal but said Turkey was open to talks with the United States.

Nauert said: “Under the NATO agreement, which of course, Turkey is a NATO member, they are only supposed to buy … weapons and other materiel that are interoperable with other NATO partners. We don’t see that as being interoperable. We obviously, though, have a robust defense trade relationship with the government of Turkey, and we will continue to raise our concerns with them on any kind of pending sales or anything of that nature.”

Nauert began her briefing on Thursday by reading a statement to commemorate World Press Freedom Day. While recognizing the crucial role of the press around the globe, Nauert mentioned Turkey, along with Cuba, Burma, Egypt and China, as countries where journalists have been detained for their reporting.

“There are more journalists jailed in Turkey than in any other country around the world. That is a tremendous concern. We believe that more voices rather than fewer voices being heard helps advance a democratic society and helps give people voice to their concerns,” she said in response to a question.

“We support the goal of improved media freedom in Turkey; we’ve discussed that a lot here at the State Department. We raise the issue – I want to tell you – directly with the Turkish government on many occasions. We continue to highlight that. We also do it not only face to face with our counterparts but also through various multilateral institutions. So thank you for highlighting that, and we’ll continue to raise our concerns with press freedom in Turkey and elsewhere,” she said.

“In Turkey, for example, some of our – some of your colleagues here, if they were to head home to Turkey, they would be arrested. Why? In part, because of the job that they are doing each and every day.”