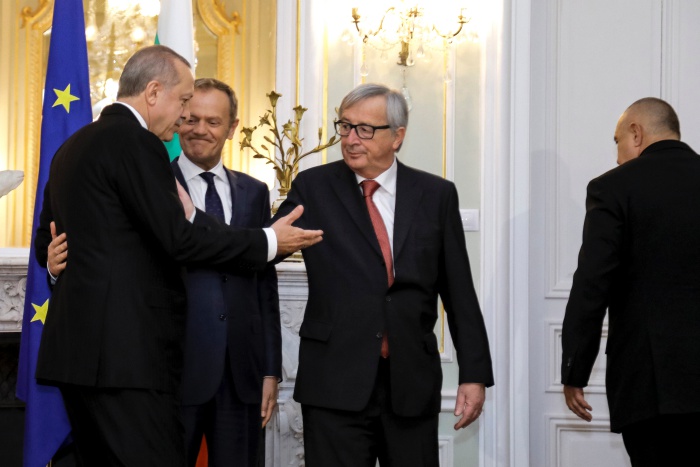 The ruling Justice and Development Party (AKP) government effectively abandoned European Union accession talks when its leader, Recep Tayyip Erdoğan, concluded that he had consolidated enough power with the party’s third election victory in 2011, garnering almost 50 percent of the vote. Since then, many in Brussels have trouble acknowledging the fact that Erdoğan has deliberately derailed the process and systematically adopted policies to make patching the rupture nearly impossible. Long-time Turkey-skeptics, of course, played their traditional disruptive role as well.

The first and most significant road marker for this reversal was Erdoğan sidelining the number one pledge of his election campaign, which was to deliver a brand new, more democratic and liberal constitution that would replace the 1982 military era charter. Many voters including liberals and members of the Gülen movement supported the AKP precisely because of this campaign promise. In a quick reversal of his pledge, Erdoğan delegated the task of drafting a constitution to a stillborn parliamentary commission that was set to fail from the start with its own questionable rules and procedures and lack of transparency. The commission eventually threw in the towel and disbanded without achieving anything substantial on outstanding issues such as the definition of citizenship and language issues. In other words, Erdoğan cheated on his backers.

The next year, most of the remaining campaign promises such as increased transparency and more accountability in governance were delivered, but in fact, some of the gains in Turkish democracy had actually been rolled back with a series of rushed legislative changes. The real and ugly face of the Erdoğan regime was displayed more clearly during the Gezi Park events that triggered nationwide anti-government protests in the summer of 2013, when Erdoğan personally ordered brutal and violent police action to suppress legitimate protests. The final nail in the coffin was delivered in December 2013 when he turned the judiciary and police department upside down with purges in the aftermath of major corruption investigations that incriminated him and his family.

Despite these road markers that show backsliding on the EU’s Copenhagen political criteria, Brussels has been beating around the bush ever since. The accession talks were dead in their tracks, yet EU talking heads kept repeating the same talking points and expressing statements of concern. As the Turkish government was decimating media outlets in a wholesale approach starting with the seizure of Koza İpek, the third largest media outlet in the country, in 2015 just before the critical national elections, the EU was singing a different tune and looking the other way. When the government later took over best-selling national newspaper Zaman in March 2016 along with several publications and the country’s largest home distribution network, Cihan Media, in an unlawful operation, we heard the same tune from EU officials with no serious action to back up the rhetoric. Let’s not forget the migrant deal that gave Erdoğan carte blanche to arm-twist the EU and leverage his demands with the threat of flooding Europe with refugees. His bullying tactics worked like magic. In an unprecedented move, the EU even postponed the critical Progress Report on Turkey after the elections

Emboldened by the lack of action from Turkey’s largest trading partner and encouraged by the EU’s appeasement policies, Erdoğan played his biggest ploy by orchestrating a false flag coup attempt to create a pretext to complete what he has been pondering for some time — transforming the Turkish parliamentary democracy rooted in secular values into an Islamist dictatorship. The purge and arrest of some 30 percent of all judges and prosecutors as well as diplomats who apparently had nothing to do with the coup indicated that all these moves were planned way in advance. The scapegoat as usual was the Gülen movement, which stood up against the repressive regime of Erdoğan when most others were aligning their policies to appease the Islamist government.

In the meantime, Turkish officials who engage with the EU at both the political and technical level have been busy buying time for Erdoğan. Briefing lawmakers at the EU Harmonization Commission in Parliament on April 4, 2018 Selim Yenel, the undersecretary of Turkey’s EU Affairs Ministry, admitted that the Turkish government deliberately delayed its response to the EU on how to move forward in fulfilling terrorism criteria as part of an agreement for visa free travel for Turkish nationals. In other words, while the government was using anti-terror laws to seize companies, lock up hundreds of journalists and imprison some 60,000 innocent people in one and a half years, Turkish officials were making promises without actually delivering anything to their EU partners.

The same game was played with the protection of personal data, another persistent concern for EU officials in Brussels but which was never a priority for the Erdoğan government, which has continued to profile unsuspecting citizens based on their personal views, ideological and political affiliation and ethnic and religious background. Turkish intelligence agency MIT acts with full impunity in accessing personal and private data and collecting it from all sources at the disposal of the Erdoğan regime, which in turn uses it to bully, intimidate and smear critics and opponents. A paper that explained how Turkey would supposedly address the EU’s concerns on abuse of anti-terror laws and personal data was submitted to the EU in February 2018, but in practice it means nothing in today’s Turkey.

Unless the EU acknowledges the fact that revitalization of the EU accession talks is only possible if there is a political will on the Turkish side, which has apparently been lacking since 2011, we’ll keep playing the game of beating around the bush time and again. To be blunt, Erdoğan is using the EU to keep trade, investment and tourism links alive, which is a lifeline for his government’s economic policies, without which his rule would be at risk. In return, he is not giving anything in terms of the restoration of political rights, the rule of law or rights and freedoms.

Moreover, the EU’s appeasement policies under the guise of engagement provides legitimacy for this government’s oppressive actions on a regional and international scale. For what it’s worth, the uneasy Varna summit in March 2018 between the EU and Turkey helped Erdoğan claim new legitimacy and credibility in that sense even though the outstanding issues on accession talks remained unresolved. Time and again Erdoğan has used the same tactics of pretending to be easing tension only to come back and bite the Europeans in the back when it serves his own petty interests, which do not necessarily coincide with the interests of Turkey.

The shortsighted policies on the EU side will further encourage the Erdoğan government to take steps to undermine European countries with fifth column activities using proxy elements among diaspora communities. As the repression in Turkey continues unabated, more Turks will be motivated to seek sanctuary in Europe in order to escape the relentless persecution of this brutal regime. Greece, a neighboring country, is already feeling the impact of this wave as many Turks from groups critical of the Erdoğan government have arrived to seek political asylum. The Gülen movement, tens of thousands of members of which have been jailed on trumped-up charges in Turkey, is leading the pack. Yet, we have not seen the rest of the EU taking measures to alleviate this humanitarian crisis that has been deliberately triggered by the policies of the Erdoğan government.

The sooner the EU realizes that Erdoğan’s heart is not with Turkey aligning with European values, the better it will be to stop pretending that serious troubles in the accession talks will somehow sort out themselves at the technical level. These negotiations at the bureaucratic level are not feeding decisions at the senior level. But rather, decisions were personally made in the office of Erdoğan, who then allows others to play their own game without much impact on the final decision.

It is time to stop this charade and come up with sensible policies that will make a difference for Brussels and millions of Turks who have pinned their hopes on the EU and see their future with Europe. How the Austrian presidency of the European Council in the second half of the year will deal with these issues remains to be seen.

Sofagate: EU leaders get a taste of their own medicine

[OPINION] Has the CHP ever been democratic since Atatürk’s revolution?