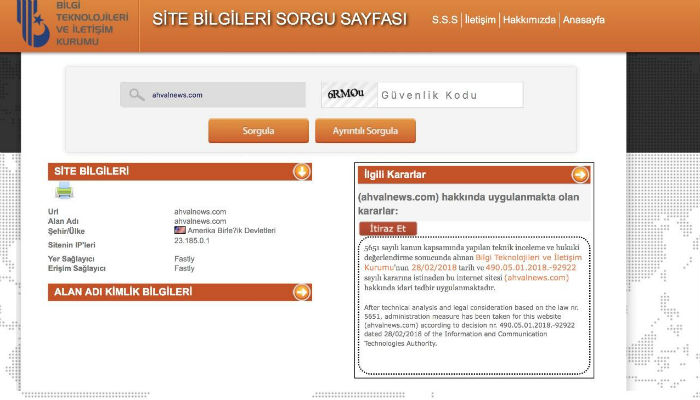 The Turkish Telecommunications Authority (BTK) on Wednesday imposed an access ban on the critical news website ahvalnews.com as the Turkish government’s crackdown on the press organizations continues at full speed.

The BTK barred access to Ahval citing Law No. 5651, approved by the Turkish Parliament in February 2014 to regulate Internet broadcasting. Ahval, which was established by veteran Turkish journalist Yavuz Baydar in November 2017, is known for its critical coverage of ongoing developments in Turkey, which has been under a state of emergency since a failed coup attempt on July 15, 2016.

Dozens of journalists have been jailed since the putsch, while more than a hundred media outlets have been closed down under the pretext of a counter-coup fight due to their anti-government stance.

The ban on Ahval was welcomed by an official at the Turkish government’s press department. Sercan Doğan, who works for the prime ministry’s Directorate General of Press and Information (BYEGM), wrote on Twitter on Thursday: “Ahval news has been sent flying, good riddance.”

The BTK has cited no reason for the ban, which Ahval is planning to appeal in the Turkish courts.