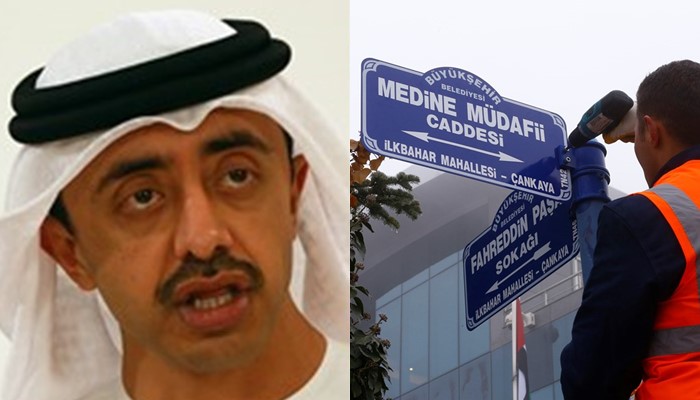 The streets around the United Arab Emirates Embassy in Ankara have been changed to reflect Turkey’s Ottoman heritage in the Middle East, including its defense of Muslim holy sites, in the wake of a diplomatic spat between Turkey and the UAE, the state-owned Anadolu news agency reported.

The Ankara Municipality has renamed the former 613th Street Fahreddin Pasha Street, after the Ottoman governor of Medina from 1916 to 1919, while 609th Avenue, in front of the embassy, is now known as Medine Müdafii (Defender of Medina) Avenue.

The crisis erupted over comments tweeted by the UAE Foreign Minister Sheikh Abdullah bin Zayed Al Nahyan in December regarding the behavior of Ottoman governor and commander Fahreddin Pasha.

“Do you know that in 1916 Turkish Fakhri Pasha committed a crime against the people of the Prophet’s City, stole their money and kidnapped them and their passengers on trains to Damascus […]. The Turks also stole most of the manuscripts of the Mahmudiyah library in the city and sent them to Turkey. These are Erdogan’s ancestors and their history with Arab Muslims,” Al Nayan tweeted.

Turkish President Recep Tayyip Erdoğan on Dec. 20 lambasted Al Nayan: “Those miserable people are in such a delirious state that they can say without shame that Erdoğan’s ancestors stole sacred relics from Medina and brought them to Istanbul! That is called protecting a place from intruders, not stealing. Protecting in the name of martyrdom.”

“You pitiful person who slanders us: Where were your ancestors while Fahreddin Pasha was defending Medina?” he added.

The Turkish Foreign Ministry on Dec. 21 summoned the chargé d’affaires of the United Arab Emirates Embassy in Ankara over the comments tweeted by the UAE foreign minister.