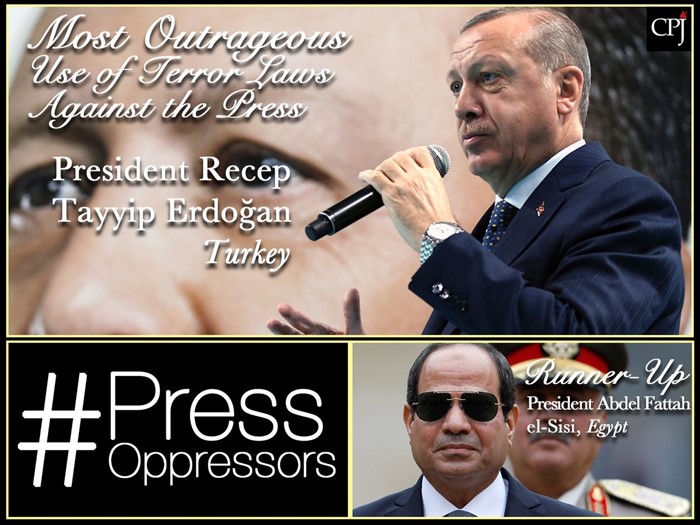 The Committee to Protect Journalists (CPJ) has named Turkish President Recep Tayyip Erdoğan as the winner of several categories in their recognition of world leaders who have gone out of their way to attack the press and undermine the norms that support freedom of the media, including the most thin skinned and the most outrageous user of terror laws against the press, CPJ announced on their website.

Erdoğan’s clinching of the title of Most Thin-skinned world leader – followed even by US President Donald Trump, notorious for his frequent attacks on media outlets and journalists — arises from the fact that Turkish authorities have repeatedly charged journalists, news outlets and social media users with insulting him, insulting other Turkish leaders and insulting “Turkishness” in general. Over the course of 2016, the Turkish judicial system handled 46,193 cases of “insulting the president” or “insulting the Turkish nation, the Republic of Turkey, the Parliament, the government or the institutions of the judiciary,” the Cumhuriyet daily reported in June 2017, citing figures from the Justice Ministry.

Turkey is the worst jailer of journalists in the world, with at least 73 behind bars when CPJ conducted its most recent prison census on Dec. 1, 2017, giving Erdoğan the dubious title of perpetrating the Most Outrageous Use of Terror Laws Against the Press. Every journalist jailed for their work in Turkey is under investigation for, or charged with, anti-state crimes — in most cases for belonging to, aiding, or disseminating propaganda for an alleged terrorist organization. President Abdel Fattah el-Sisi of Egypt, an infamous jailer of journalists and whose government passed a new anti-terrorism law furthering its crackdown on the press, was the runner-up behind Erdoğan.

US President Trump was declared winner of the Overall Achievement in Undermining Global Press Freedom for consistently undermining domestic news outlets and declining to publicly raise freedom of the press with repressive leaders including Erdoğan, who has applauded at least one of Trump’s verbal attacks on journalists.

Other world leaders who were recognized for their attacks on the press were President Xi Jinping of China, winner of the Tightest Grip on Media award, with Russia’s President Vladimir Putin the runner up, and Aung San Suu Kyi of Myanmar as the Biggest Backslider in Press Freedom, followed by President Andrzej Duda of Poland.

According to CPJ, from an unparalleled fear of their critics and the truth to a relentless commitment to censorship, these five leaders and the runners-up in their categories have gone above and beyond to silence critical voices and weaken democracy.