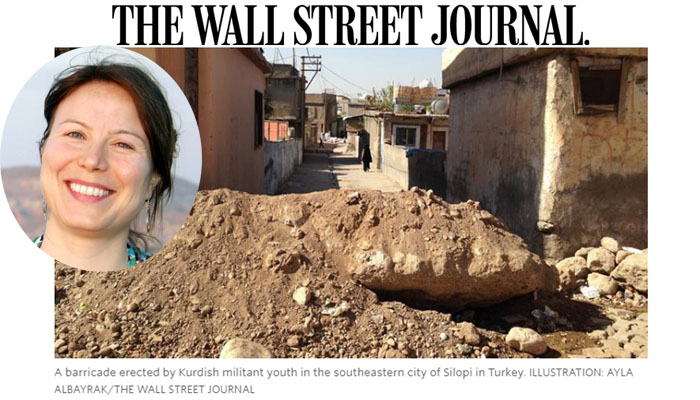 A Turkish court on Tuesday sentenced Wall Street Journal reporter Ayla Albayrak to two years, one month in prison on charges of engaging in terrorist propaganda in support of the Kurdistan Workers’ Party (PKK).

According to a WSJ report on Tuesday, legal action against Albayrak, who is currently in New York, began on Aug. 19, 2015, for her article “Urban Warfare Escalates in Turkey’s Kurdish-Majority Southeast.”

The article and accompanying video reported on the state of a conflict in Turkey’s majority-Kurdish-populated town of Silopi between Turkish security forces and the outlawed PKK. It included interviews with the local mayor and residents and a Turkish government official as well as a representative of the Patriotic Revolutionary Youth Movement (YDG-H), which Turkey says is the youth unit of the PKK.

Albayrak said the original article didn’t include any praise for the PKK but rather provided a balanced and objective view of the urban warfare that had gripped areas of Turkey’s predominantly Kurdish Southeast at the time.

“The decision shows the extent to which the authorities did not want the operations that were going on in Turkey’s southeast to be reported on,” said Albayrak. “It also shows yet again, that the international media is not immune to the ongoing press crackdown in Turkey.”

Albayrak also said she plans to appeal the decision.

“The sole purpose of the article was to provide objective and independent reporting on events in Turkey, and it succeeded,” he added.

Condemning the decision against the WSJ reporter, the New York-based Committee to Protect Journalists Europe and Central Asia program coordinator, Nina Ognianova, said, “The conviction of Ayla in Turkey is a very worrying sign and an escalation of the crackdown on the press.” She called on Turkish authorities to overturn the decision immediately.

In November 2015 Albayrak, who has dual Finnish and Turkish citizenship, received a written order on her door to visit her local police station in İstanbul where she was notified she was under investigation for spreading terrorist propaganda.

At the police station she gave a statement saying the article accurately reflected the state of the conflict between the PKK and the Turkish government. In April 2016 a prosecutor in southeastern Turkey filed an indictment against Albayrak alleging that she had violated anti terror laws.

Turkey was ranked 155th on Reporters Without Borders Press Freedom Index this year, worse than Russia or Pakistan. The index is based on statistics of violence against journalists along with evaluations of pluralism, media independence, self-censorship and legislation.