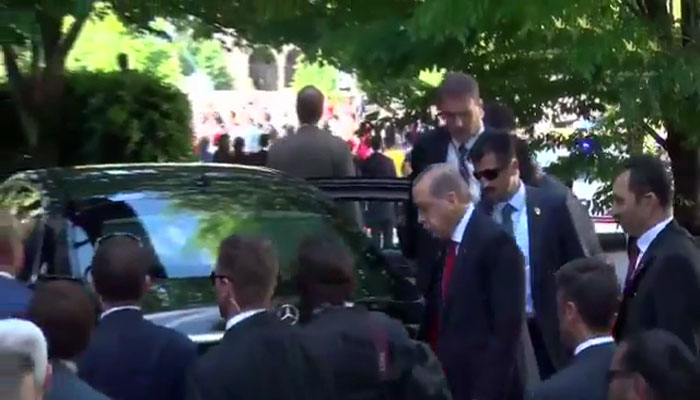 A video from Voice of America (VOA) Turkish news service released on Thursday shows that Turkey’s President Recep Tayyip Erdoğan watched his bodyguards and embassy security staff violently attack protesters outside the ambassador’s residence in the US capital on Tuesday.

According to the video, one of Erdoğan’s bodyguards appears to speak with him, sitting in the back of a black Mercedes, while protesters chant “Baby killer Erdoğan.”

After the exchange, the bodyguard runs towards the protesters, and Turkish security personnel at the residence of the Turkish ambassador attack immediately after Erdoğan’s bodyguard approaches them.

The video also shows Erdoğan watching his bodyguards attacking the protesters after getting out of the vehicle before he enters ambassador’s residence.

Audiovisual analysis of the footage by professional sound editor Salih Ferhad indicates that Erdoğan’s security detail shouted out the phrases “he says attack” and “come, come, come” as they charged the protesters and after the president appeared to relay orders from the back of his car, according to a Thursday report by The Daily Beast.

The US State Department on Wednesday summoned Serdar Kılıç, the Turkish ambassador to the United States, over violence against protesters involving President Erdoğan’s bodyguards and embassy staff.

The demonstrators were protesting the policies of Turkish President Erdoğan, who was visiting Washington for a White House meeting with Donald Trump earlier in the day, and were countered by agitated supporters of the Turkish head of state.

Police intervened in the fighting between the two groups, while a video recording posted on social media the same day also revealed that Erdoğan’s guards were involved, physically attacking the protesters. Nine people were injured, with at least one of them in serious condition, according to US media outlets.

The US State Department had on Wednesday said it was “concerned by the violent incidents involving protesters and Turkish security personnel” in a statement on Wednesday.

“Violence is never an appropriate response to free speech, and we support the rights of people everywhere to free expression and peaceful protest,” the statement said.

A State Department official said the Turkish security that was involved appears to be a mix of Turkish Embassy and Erdoğan’s security staff.

CNN reported that federal and local law enforcement are going through security footage to identify the parties involved in the assault.