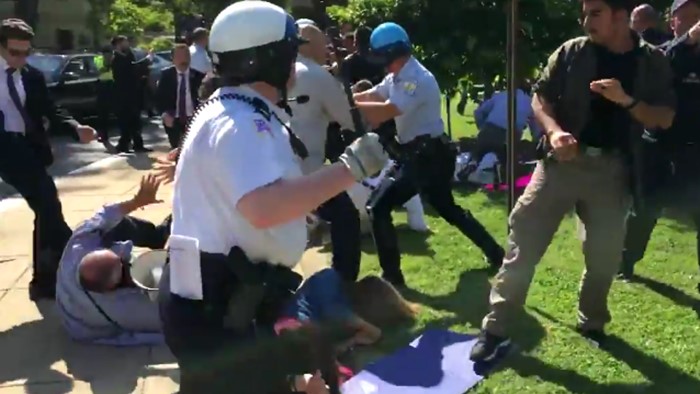 The Metropolitan Police Department of Washington, D.C., has issued a statement on a physical altercation that took place outside the Turkish Embassy on Tuesday when a group protesting the policies of the visiting Turkish president clashed with his supporters.

“The actions seen outside the Turkish Embassy yesterday in Washington, D.C., stand in contrast to the First Amendment rights and principles we work tirelessly to protect each and every day. The Metropolitan Police Department made two arrests following yesterday’s incidents and we have every intention to pursue charges against the other individuals involved. We will continue to work with our partners at the United States State Department and the United States Secret Service to identify and hold all subjects accountable for their involvement in the altercation,” said the statement.

Turkish President Recep Tayyip Erdoğan’s security guards on Tuesday attacked a group of people who had gathered outside the Turkish Embassy in the US capital to protest his policies back home.

Erdoğan met with US President Donald Trump in a scheduled gathering on Tuesday. During his visit to the Turkish Embassy after the meeting, his supporters clashed with another group who had gathered outside the embassy building to protest Erdoğan’s policies in Turkey.

Neither the State Department nor the Secret Service has issued a statement on the involvement of Erdoğan’s security detail in the fracas.