Reactions mount to assault of Erdoğan protestors by Turkish security 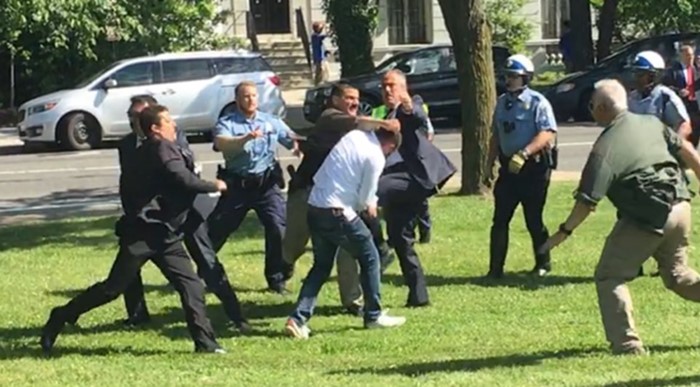 Turkish security officials were part of an assault on demonstrators protesting outside the Turkish ambassador’s residence on Tuesday according to two law enforcement sources, CNN has reported, resulting in widespread concern from the DC police department, the US State Department and the US Congress.

The demonstrators were protesting the policies of Turkish President Recep Tayyip Erdoğan, who was visiting Washington for a White House meeting with Donald Trump earlier in the day, and were countered by agitated supporters of the Turkish head of state.

Police intervened in the fighting between the two groups, while a video recording posted on social media the same day also revealed that Erdoğan’s guards were involved, physically attacking the protesters. Nine people were injured, with at least one of them in serious condition, according to US media outlets.

The US State Department said it is “concerned by the violent incidents involving protestors and Turkish security personnel” in a statement on Wednesday.

“Violence is never an appropriate response to free speech, and we support the rights of people everywhere to free expression and peaceful protest,” the statement said.

“We are communicating our concern to the Turkish government in the strongest possible terms.”

A State Department official said the Turkish security that was involved appears to be a mix of Turkish Embassy and Erdoğan’s security staff, according to the CNN report.

The Metropolitan Police Department of Washington issued a statement on Wednesday saying: “The actions seen outside the Turkish Embassy yesterday in Washington, D.C., stand in contrast to the First Amendment rights and principles we work tirelessly to protect each and every day. The Metropolitan Police Department made two arrests following yesterday’s incidents and we have every intention to pursue charges against the other individuals involved. We will continue to work with our partners at the United States State Department and the United States Secret Service to identify and hold all subjects accountable for their involvement in the altercation.”

“We intend to ensure accountability of anybody involved,” DC Police Chief Peter Newsham reiterated at a press briefing on Wednesday.

CNN reports that federal and local law enforcement are going through security footage to identify the parties involved in the assault.

Meanwhile, Rep. Ed Royce, chairman of the House Foreign Affairs Committee in the US Congress, sent a letter today to Attorney General Jeff Sessions and Secretary of State Rex Tillerson urging immediate action to hold individuals accountable for the brutal attacks on peaceful demonstrators outside the Turkish ambassador’s residence on Tuesday.

“Video evidence indicates men dressed in suits viciously beat multiple individuals, throwing them to the ground and kicking them in the head. Numerous news reports indicate these individuals were members of President Recep Tayyip Erdogan’s security detail who accompanied him on his official state visit this week. Alarmingly, this behavior is indicative of the broad crackdowns on political activists, journalists and religious freedom in Turkey that have greatly harmed Turkish democracy in recent years,” said Royce in his letter.

“To send a clear message that these acts of violence will not be tolerated, I ask that you immediately look into this matter and bring all appropriate criminal charges before these individuals leave the United States. Agents of foreign governments should never be immune from prosecution for felonious behavior.”