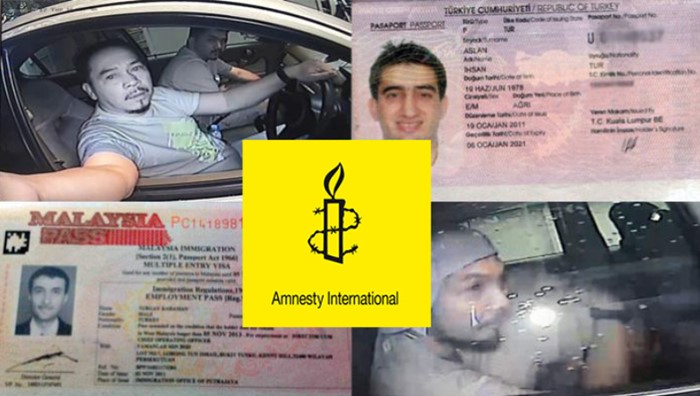 Amnesty International has launched an “urgent action” for three Turkish nationals who were detained in Malaysia, asking people to call on Malaysian officials to avoid extradition.

“Three Turkish nationals have been arrested and detained in Malaysia under anti-terrorism legislation. There are concerns about their safety if they are extradited to Turkey. … There are also concerns that they could be at risk of torture or other ill-treatment, unfair trial or other serious human right violations, should they be returned to Turkey, following the opaque conditions of their apprehension. The men are currently being held in the police headquarters at Bukit Aman in Kuala Lumpur,” AI said in its urgent action statement issued on May 5.

Turgay Karaman, the principal of an international school in Ipoh, and İhsan Aslan, a businessman, were detained by unidentified individuals in Kuala Lumpur on May 2, 2017. The inspector-general of police reportedly said that the two men were being held for activities that threaten the safety of Malaysia. On May 4, İsmet Özcelik – a university director also residing in Malaysia – was arrested on the same charges.

Previously, in October 2016, two other Turkish nationals were detained in Malaysia and were deported the following day. Both men were arrested upon their return to Turkey where they remain in detention.

All five have in common that they are affiliated with the Gülen movement, on which the government pinned the blame for a July 15 coup attempt and detained more than 120,000 in anti-movement investigations.

“Please write immediately to [Malaysia’s PM and Home Minister] in English or your own language:

“Urging the Malaysian authorities to comply with their obligations under international human rights law not to deport, extradite or otherwise return Turgay Karaman, Ismet Ozcelik and Ihsan Aslan or any other person to a country where they would be at risk of torture, other ill-treatment or other serious human rights violations;

“Expressing concern about the arbitrary manner in which they were reportedly detained;

“Urging them to grant both men immediate access to their lawyers, family visits and an independent court and reminding them that in all proceedings related to offences the most rigorous internationally recognized standards for fair trial must be respected,” Amnesty’s statement read.