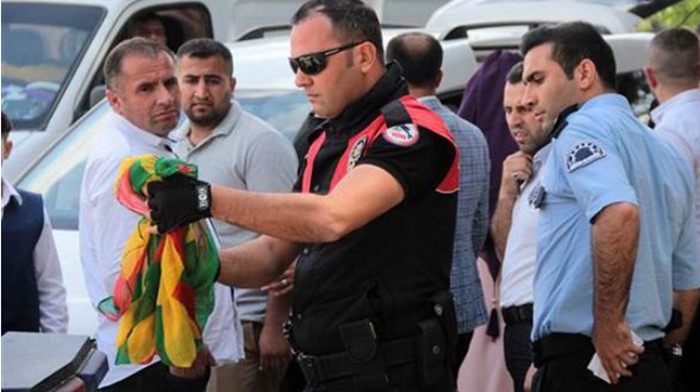 Turkish police detained two people in a wedding convoy for holding a piece of red, green and yellow fabric, colors that symbolize the outlawed the Kurdistan Workers’ Party (PKK), in Adana on Sunday, Hürriyet reported.

According to the report, police stopped the wedding convoy on Fuzuli Street in the Ceyhan district. After detaining two people, a policeman set the colorful material on fire with his lighter.

The ruling Justice and Development Party (AKP) government tolerated PKK symbols during a settlement process with the terrorist group between the end of 2012 and mid-2015.

“Saying ‘Mr. Öcalan’ [jailed PKK leader Abdullah Öcalan] is no longer a crime. Holding the flag of the PKK and posters of Öcalan are no longer crimes,” said then-Deputy Prime Minister Bülent Arınç during a visit to the US in November 2013.

Turkish authorities had conducted direct talks with Öcalan for several years until a truce in effect collapsed in the summer of 2015.