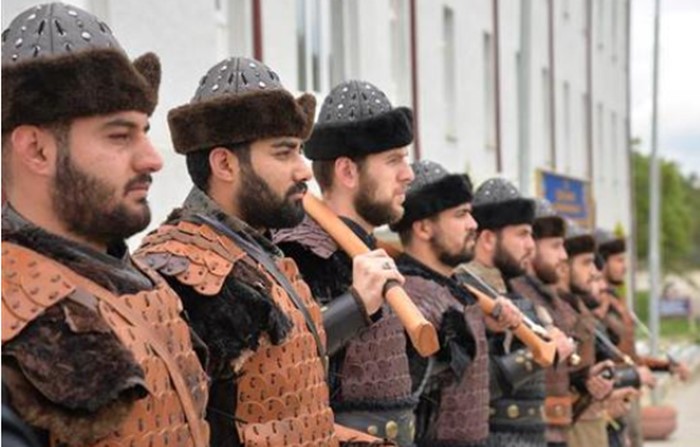 The reinvention of the Ottoman Empire’s founding era, which has been promoted by President Recep Tayyip Erdoğan and the ruling Justice and Development Party (AKP) in recent years through various means including a TV series, has reached new heights with the installation of an “honor guard” at the tomb of Ertuğrul Gazi, father of Osman Gazi, founder of the Ottoman Empire, in Bilecik province, Hürriyet reported on Sunday. 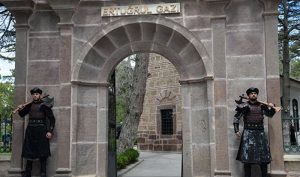 The project, which was devised by the Bilecik Governor’s Office in cooperation with the Turkish military, has been put into practice with 13 soldiers in traditional “alp uniforms” of the Ottoman era, in the Ertuğrul Gazi tomb compound in Söğüt. The honor guard will be on duty 365 days of the year.

The reinvention of the past became visible when soldiers in clothing representing the 16 Turkish states in history appeared on the steps of Erdoğan’s presidential palace in Ankara, on Jan 12, 2015, during a visit of Palestinian President Mahmoud Abbas.

“Diriliş: Ertuğrul,” a historical Turkish adventure series on the founding era of the Ottoman Empire, has been aired on state-run TRT since Dec. 10, 2014 and is one of President Erdoğan’s favorites. 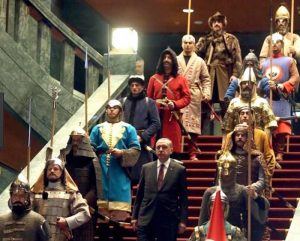 Bayülgen, known for his oddball personality and mocking of celebrities, had made fun of Best Serial award winner “Diriliş: Ertuğrul” during the Pantene Golden Butterfly awards ceremony on Nov. 14, following which the team returned the award to the organizers.

After the incident, Erdoğan targeted the show’s organizers and Bayülgen, who had said he never watched “Diriliş: Ertuğrul.”

Erdoğan has been hosting foreign leaders in Ottoman palaces in İstanbul in recent years.
Ottoman symbols have also been frequently seen in recent years in Turkey as many social media users depict Erdoğan as an Ottoman sultan.