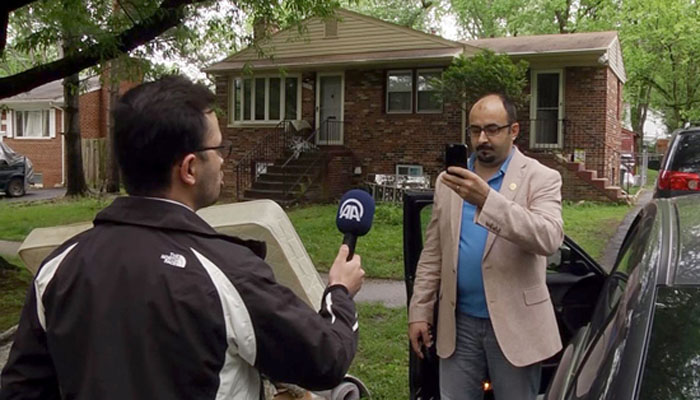 Turkey’s state-owned media continues to harass dissident Turkish journalists who live in exile in the US, such as Emre Uslu, a former columnist for Today’s Zaman, which was shuttered by the government last year, who was subjected to harassment in front of his residence on Friday.

According to tweets from Emre Uslu, a staunch critic of Erdoğan and an academic at Virginia International University, he was harassed by Safvan Allahverdi, Anadolu’s DC reporter, as he was leaving his residence on Friday.

After a series of reports in the Turkish and US press last year that Turkish journalists who are living in exile in the US due to their critical views of Erdoğan were being surveilled by pro-government media members, including from the state-run Anadolu news agency, the incident came days before Turkish President Recep Tayyip Erdoğan’s visit to the US on May 16-17.

Sharing a photo of Allahverdi and his crew who recorded a video of him without his permission, Uslu said they left when they saw that he was calling the police.

“FETÖ,” or the Fetullahist Terrorist Organization, is a derogatory term coined by President Erdoğan and the ruling Justice and Development Party (AKP) to refer to the faith-based Gülen movement, a global civil society movement inspired by the views of US-based Turkish Islamic scholar Fethullah Gülen.

Allahverdi also shared a photo that shows a sign in front of Uslu’s office saying “This is Emre Uslu’s office in the FETO-linked Virginia International University.”

Following Anadolu’s reports, Uslu was also targeted in social media by people who are supporters of the AKP government and Erdoğan, including Turkey’s Deputy Minister of Youth and Sports Abdullah Boynukalın.

In a tweet, which also included the video of Uslu, Boynukalın said: “You will be a dishonored fugitive for your entire life. Turkey will be more powerful. And wherever you go, we will find you.”

Former president of the AKP Youth Wing and current AKP deputy Boynukalın was among a group of around 200 assailants who stormed the Hürriyet newspaper’s building in İstanbul in September 2015 for reports that were critical of the government.

In September of last year, pro-Erdoğan media outlets spread videos and photos of government-critical journalists Aydoğan Vatandaş, Adem Yavuz Arslan, Ekrem Dumanlı and Emre Uslu, who live in different cities in the US.

Following a report in The Wall Street Journal on March 24 revealing that retired Lt. Gen. Mike Flynn, ousted national security advisor of the Trump administration, discussed in a meeting with top Turkish government officials last September the illegal removal from the United States of Turkish Islamic cleric Fethullah Gülen, who is accused by Turkish authorities of masterminding a failed coup in Turkey last summer, and his extrajudicial return to Turkey.

The dates of surveillance of Turkish journalists occurred only days after Flynn’s meeting with Turkish officials.