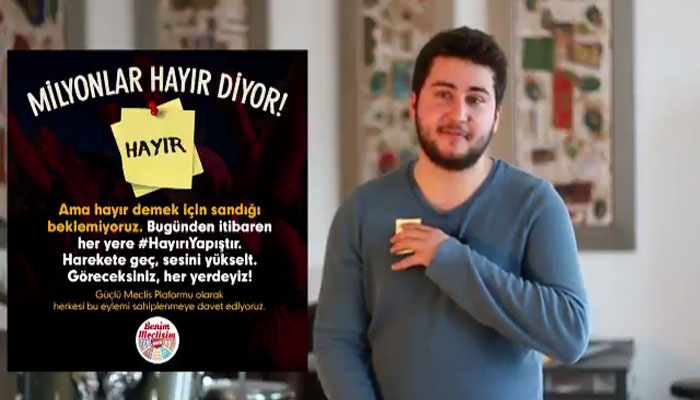 Twenty-one-year-old university student Ali Gül was arrested days after a video he appeared in as part of a “No” campaign went viral in the run-up to a referendum on a change in system of governance in Turkey.

The referendum, scheduled to take place on April 16, is set to introduce a shift from a parliamentary system of governance to an executive presidency and give more power to President Recep Tayyip Erdoğan.

The catchy video, titled “What does a ‘No’ mean?”, was quickly shared by thousands of social media users after it was first released on March 8. Gül pointed to the absurdity that Erdoğan and the government have characterized millions of potential ‘No’ voters as terrorists.

Detained on March 20 for allegedly insulting Erdoğan on a Twitter account, claimed to be controlled by him, Gül was arrested on Tuesday.

“[Pro-gov’t daily] Yeni Şafak targeted him and Ali was detained. The article in the paper reads that the social media account that insults the president turns out to be controlled by the person who recorded this video,” Yiğit Acar, a lawyer representing Gül, told the media, denying any links between his client and the Twitter account in question.

President Erdoğan’s lawyer, Ahmet Özay, claimed on Twitter that Gül will be sentenced to one-and-a-half years to eight years for his crimes of “insulting the Turkish nation, the Turkish Republic, institutions and organs of the state, praising crime and criminality and insulting the president,” He alleged that the @DjerzinskiFelix Twitter account also belongs to Gül and shares some criminal materials.

Transparency International’s (TI) Turkey branch said in mid-February that Turkish police had detained at least 80 people who are known to have been involved in activities to endorse a “No” vote in the upcoming referendum between Dec. 25, 2016 and Jan. 31, 2017 alone. (Parts of this story first appeared at TurkeyPurge.com)