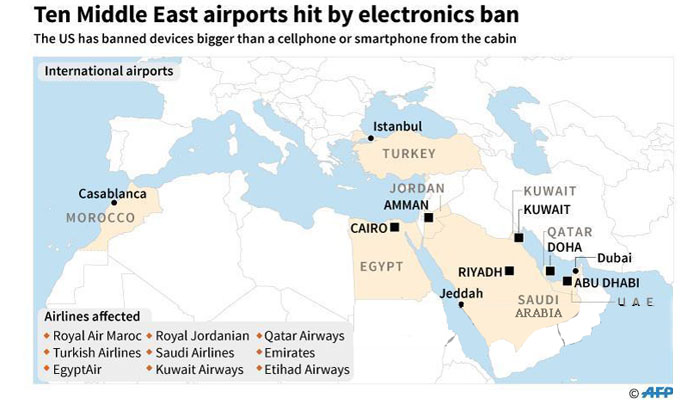 The US announced late on Monday that electronic devices larger than a mobile phone will be prohibited in the passenger cabin on flights from 10 airports in eight Muslim-majority countries, including Turkey.

According to a briefing by Department of Homeland Security officials on Monday night, the restricted items include laptop computers, tablets, cameras, travel printers and games bigger than a mobile phone or a smartphone.

The affected airlines are Royal Jordanian, Egypt Air, Turkish Airlines, Saudi Arabian Airlines, Kuwait Airways, Royal Air Maroc, Qatar Airways, Emirates and Etihad Airways for direct flights to the US. However, the restrictions will not apply to aircraft crews.

The airlines have been given 96 hours, beginning at 07:00 GMT on Tuesday, to ban devices bigger than a mobile phone or smartphone from cabins. The ban had no end date.

The new US ban will affect passengers on some 50 flights a day from some of the busiest hubs in the Middle East, Turkey and North Africa.

While Homeland Security officials said the restriction was based on intelligence reports about extremist groups that have an ongoing interest in staging attacks against American aviation targets.