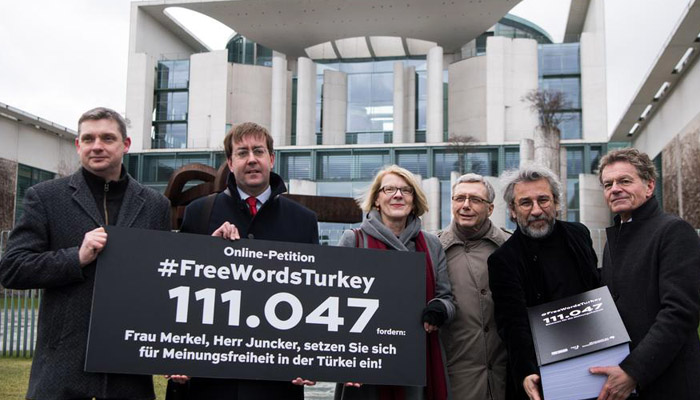 More than 125,000 people in Germany signed a petition that urges German Chancellor Angela Merkel and the EU Commission to adopt a clear and resolute position on the current state of freedom of expression in Turkey.

According to Deutsche Welle (DW), the petition, called #FreeWordsTurkey, was launched on Friday by the German Publishers and Booksellers Association, the German branch of PEN International and Reporters Without Borders Germany.

The action came after German daily Die Welt’s Turkey reporter Deniz Yücel was detained in Turkey on Feb. 17 as part of an investigation for publishing stories on the leaked emails of President Recep Tayyip Erdoğan’s son-in-law and Energy Minister Berat Albayrak.

Underlining that “Freedom of expression is in acute danger in Turkey,” the online petition said “the German federal government and the EU Commission are obliged to re-evaluate their policies with regard to the countries in question.”

Demonstrating in front of the Chancellor’s Office in Berlin early on Friday, journalists and writers, including former Cumhuriyet daily Editor-in-Chief Can Dündar, demanded that the German government provide quick aid to journalists and writers affected by Erdoğan’s crackdown such as issuing non-bureaucratic emergency visas to them.

After reaching its target of 150,000 signatories in total, the online petition, which ends with the exclamation “Free the words!” will be sent to both Merkel and EU Commission President Jean-Claude Juncker.