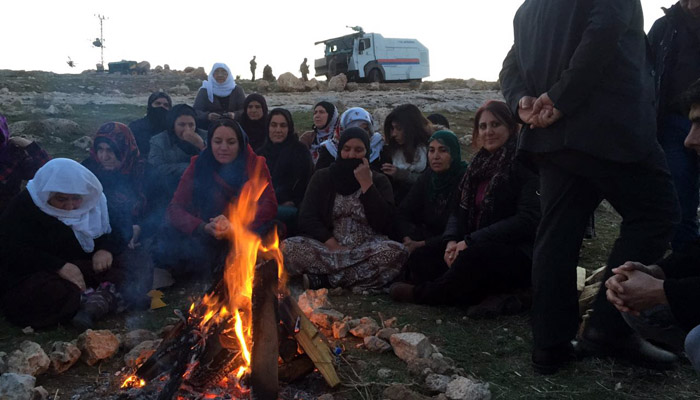 A report by Turkey’s Human Rights Association (İHD) shows that several families cannot reach their children in the village of Koruköy in southeastern Mardin province due to a blockade by Turkish security forces in place since Feb. 11.

According to the report, an İHD delegation wanted to visit Koruköy, located in the Nusaybin district, on Feb. 20; however, security forces stopped them and refused them entry to the village.

Speaking with a villager in his 40s who left for health reasons, the İHD said there are families who were separated from their children after some parents were taken out of the village by security forces for medical treatment in hospitals.

According to the villager, a woman in Koruköy fainted after seeing family members tortured by security forces in the village square, and she was permitted to go to the hospital with her mother-in-law. However, her 12 and 14-year-old daughters were left in the village, and the family has not been able to get any information on them since then.

The İHD report also quoted a villager who said the operation began on the evening of Feb. 11 when helicopters started to fly over the village, and the village head announced from the mosque loudspeakers that a curfew was being imposed in the village until morning.

“There were children among those detained. Some of them were released after security forces realized they were really young. On the sixth day of the operation, we heard some gunfire; we later found some deaths had taken place. We identified three of them from pictures. All communication channels to the village are blocked. There was no water or food in the village, so we drank dirty water. Because of the dirty water, an epidemic has broken out, and many villagers were taken to the hospital with similar complaints,” he said.

During a speech in Parliament, Pro-Kurdish Peoples’ Democratic Party (HDP) Şanlıurfa deputy Osman Baydemir showed a photo of a villager, Abdi Abidin, who was apparently beaten.

“Which intelligence information or which reason can legitimize torture, which is deemed a crime by all of humanity? Those behind this practice are vile people. Nowhere in the world, no law and order grants the right to an individual to torture another person,” Baydemir said.

Baydemir said what has been taking place in Koruköy is similar to what is happening in Gaza.

The HDP deputy also called on deputies from the other parties to go to Nusaybin to see what is happening in Koruköy.

In the meantime, Interior Minister Süleyman Soylu on Friday responded to torture claims in Koruköy and accused Abdi Abidin, the person whose photo was shown in Parliament by Baydemir, of aiding and abetting terrorism.

“We have been watching the house of that old man for five months. That house is the one that hosted plans for explosions which hurt the nation in İstanbul, Mersin and İzmir. That person you call an old man is hosting terrorism,” Soylu said.

The minister also claimed that all actions in Koruköy were in compliance with the law.

After the Turkish military blockaded the village on Feb. 11, a delegation of HDP members who were trying to go into the village due to claims of torture was denied entry.

The PKK has been waging a four-decade–long war against the Turkish state to carve out an autonomous zone in Turkey’s Kurdish Southeast. More than 40,000 people are believed to have died in PKK attacks and clashes between Turkish security forces and the PKK.

Following the breakdown of a cease-fire in July 2015, clashes broke out between people affiliated with the outlawed PKK and Turkish security forces. In response to declarations of “self-governance,” the building of barricades and digging of trenches in Sur, the central district of Diyarbakır, and other towns across the Southeast, authorities began imposing 24-hour curfews and carrying out heavily militarized security operations.

According to a report by Amnesty International last December, an estimated half million people were forced from their homes as a result of the brutal crackdown by Turkish authorities over the past year, which may amount to collective punishment.