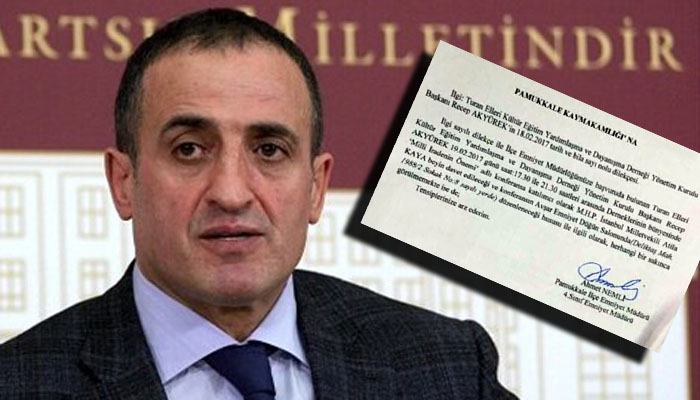 The local governor’s office in Denizli’s Pamukkale district canceled a meeting at a Public Education Center to which opposition Nationalist Movement Party (MHP) İstanbul deputy Atila Kaya was invited as a speaker to announce his “no” vote in an upcoming referendum on April 16 for a constitutional amendment package that will switch Turkey to an executive presidency.

According to the Diken news website, former MHP Denizli provincial chairman Yasin Öztürk, who organized the event, received a call from the Pamukkale Governor’s Office saying the permit that was given for the meeting had been revoked.

When Öztürk asked about the reason for the cancellation of the permit for the meeting, which was planned to be held at a Public Education Center hall in Pamukkale on Sunday, officials failed to reply and denied Öztürk’s demand to speak with the local governor.

After the MHP announced last week that four deputies from the party, Yusuf Halaçoğlu, Sinan Oğan, Nuri Okutan and İsmail Ok, had been referred to the party’s disciplinary board for expulsion because they disagree with party policy regarding the upcoming referendum, a meeting in Çanakkale where former MHP deputy Meral Akşener, who also joined “no” campaign for the referendum, was interrupted.

The management of the Kolin Hotel cut the power in the meeting hall, forcing Akşener to address party members in the dark. Following the incident hotel management apologized to her for the power cut during her speech.

Akşener has been waging a campaign against incumbent MHP Chairman Devlet Bahçeli, who is a supporter of a switch to an executive presidency. Akşener, on the other hand, opposes the changes to the constitution that will be voted in the referendum on April 16.