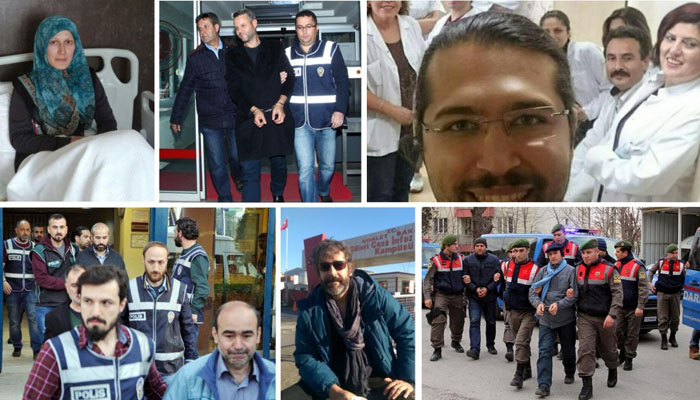 According to a tally by Turkeypurge.com, at least 358 people have been arrested and 785 others detained in the past eight days on charges of links to the faith-based Gülen movement, which Turkish authorities accuse of masterminding a failed coup attempt last July.

Police carried out the operations in 48 provinces across Turkey. With most of the arrestees being civilians, those arrested over the past eight days also included police officers, military members, civil servants, lawyers and prosecutors.

The following is a list compiled by Turkeypurge.com for the arrests, detentions, dismissals and purges that took place during the week.

On Feb. 11, at least 31 former public workers were detained during a demonstration to protest their dismissals in Malatya province.

On Feb 11, Turkey’s Doğan Media Group fired İrfan Değirmenci, a presenter on Kanal D, because he declared on social media that he would vote “no” in a referendum that will be held April 16 on constitutional amendments which will open the way to a switch from a parliamentary system of governance to an executive presidency.

On Feb. 12, 28 health workers were detained as part of an investigation into the Gülen movement, which the government accuses of masterminding the July 15 coup attempt.

On Feb. 12, Turkey’s Interior Minister Süleyman Soylu announced that a total of 8,477 people have been detained while 2,603 of them have been arrested due to their alleged links to the Kurdistan Workers’ Party (PKK) over the past five months.

On Feb. 12, 33 civilians, including businessmen and teachers, were detained as part of ongoing operations targeting followers of the Gülen movement.

On Feb. 13, the Ministry of Interior Affairs appointed a trustee to the Dicle Municipality in Diyarbakır province.

On Feb. 13, an İstanbul court accepted an indictment against 235 police officers who were arrested after a coup attempt on July 15, 2016, for having bank accounts at the now-closed, Gülen-affiliated Bank Asya and for using a smart phone application known as ByLock, which Turkish authorities believe is used by Gülen movement followers.

On Feb. 13, 70 members and administrators from the pro-Kurdish Peoples’ Democratic Party (HDP) were detained in İstanbul following raids on their homes.

On Feb. 13, an İstanbul court accepted an indictment against 29 Turkish journalists who were arrested after a coup attempt on July 15, 2016, over alleged membership in a “terrorist organization.”

On Feb. 14, two couples were detained along with four children in Edirne while they were attempting to flee to Greece.

On Feb. 14, a total of 60 businessmen, housewives and teachers were detained over alleged links to the Gülen movement.

On Feb. 14, two more relatives of US-based Turkish scholar Fethullah Gülen were arrested in the Black Sea province of Trabzon.

On Feb. 14, a total of 50 businessmen, housewives and police officers were detained as part of ongoing operations targeting followers of the Gülen movement due to their use of a smart phone application known as ByLock.

The operations, which were based in the southeastern province of Şanlıurfa, were conducted across six provinces, including İstanbul, Gaziantep, Mersin, Osmaniye and Sakarya.

On Feb. 14, Turkish pianist Dengin Ceyhan was detained over his social media posts.

On Feb. 15, 27 police officers were detained as part of an investigation into the Gülen movement, which the government accuses of organizing a coup attempt on July 15.

On Feb. 15, an indictment prepared by a Turkish prosecutor seeks a jail term of up to seven-and-a-half years for author Murat Uyurkulak, who worked as editor-in-chief of the now-closed pro-Kurdish daily Özgür Gündem for a day, as a part of a solidarity campaign launched against the investigations into the daily.

On Feb. 15, detention warrants were issued for another 29 teachers in Kahramanmaraş province who had earlier been dismissed from their positions, as part of an investigation into the Gülen movement.

On Feb. 15, 13 academics from Erciyes University were arrested in an operation in the central province of Kayseri that targeted followers of the Gülen movement for their use of a smart phone application.

On Feb. 15, 13 of 19 previously detained lawyers were referred to court, with a Bursa prosecutor demanding their arrest over the use of a smart phone application named ByLock.

On Feb. 16, a total of 12 health workers, including doctors, nurses and midwives, were detained in Eskişehir as part of an investigation into the Gülen movement.

On Feb. 16, four academics from the Rize-based Recep Tayyip Erdoğan University were detained in an operation that targeted followers of the Gülen movement for their use of a smart phone application.

On Feb. 16, 12 former employees of the Turkish Central Bank were detained in Ankara due to their use of a smart phone application known as ByLock,

On Feb. 16, İ.A.O. was detained when she stopped by the Trabzon prison on Valentine’s Day in a bid to visit her husband H.O., who had earlier been jailed as part of the government’s post-coup witch hunt.

On Feb. 17, 24 engineers from the Scientific and Technological Research Council of Turkey (TUBİTAK) were detained.

On Feb. 17, 20 businessmen and educators were detained over alleged links to the Gülen movement.

On Feb. 17, Deniz Yücel, the Turkey representative of the German Die Welt daily, was detained by police over terrorism charges in İstanbul.

On Feb. 17, A.İ.B. and his wife E.K.B, who are claimed to be the dentists of Fethullah Gülen, faced up to 15 years in prison each, according to Turkish media.

On Feb. 18, Emrah Özge Yelken, the public prosecutor in Afyon’s Dinar district, issued detention warrants for 21 women including mothers of newborn babies as well as elderly citizens, as part of an investigation into the Gülen movement.

Turkish media reported that police rounded up all 21 women the same day.

On Feb. 18, N.A., a Turkish literature teacher who was left unemployed after her school was shuttered as part of post-coup emergency rule, was detained when she stopped by Konya’s Ereğli prison to visit her imprisoned husband, İ.A.

On Feb. 18, seven academics who were earlier dismissed from Sakarya University as part of an investigation into the Gülen movement were arrested over their use of the ByLock mobile application.

On Feb. 18, 11 people were detained in Turkey’s Aegean resort district of Çeşme while they were attempting to flee to the Greek island of Chios.

On Feb. 19, Orhan Çetin, a doctor who was removed from his post at the İzmir-based Katip Çelebi University Hospital last Friday as part of an ongoing crackdown on the followers of the Gülen movement, committed suicide by jumping from the 10th floor of the hospital. (Turkey Purge)