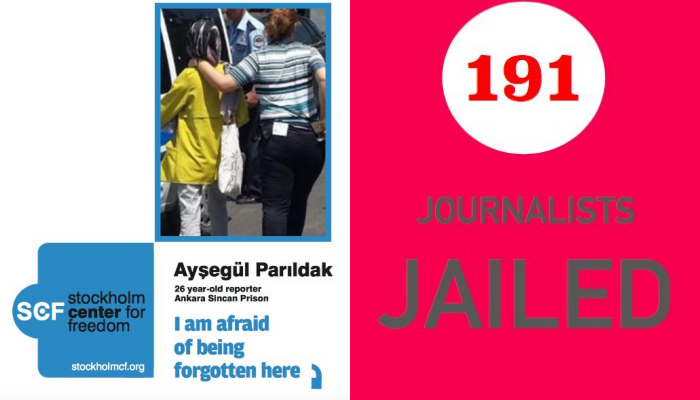 Turkey’s press freedom woes are worse than you think, says a report published on Thursday by new advocacy group the Stockholm Center for Freedom (SCF), according to which 191 journalists are in jail, 92 are wanted and 839 have been charged.

SCF has documented the individual cases of 191 journalists who are either convicted and serving time in prison or jailed in pre-trial detention.

According to the Swedish-based center, most of the journalists have not even seen an indictment against them. The report stated that 92 journalists are wanted for arrest but remain at large either in Turkey or abroad.

While the Turkish government claims that no journalists are behind bars for their journalistic activities, the SCF report provides concrete information on the status of jailed journalists, their date of arrest, affiliation and the prisons in which they are being held.

In a press release on Thursday, the center said that almost 300 journalists in Turkey, a member state of the Council of Europe and a candidate country for European Union membership, are languishing behind bars or facing outstanding arrest warrants.

“The crackdown on press freedom in Turkey is far worse than you may think,” said Abdullah Bozkurt, the president of SCF. “Most of them lost their freedom on trumped-up charges made up by the authorities while the rest, fearing imprisonment, are forced to live in exile, under often difficult and very challenging circumstances,” he added.

Although the grave situation of media freedom is well known, most reports prepared by other globally recognized advocacy groups come up with lower numbers due to the exclusion of jailed journalists from, for example, the state-run broadcasting company TRT. SCF states that their findings are based on the most up-to-date situation in Turkey as of Jan. 26, 2017 while welcoming any corrections or updates if further information becomes available.

The report also listed charges against journalists in Turkey such as “membership in a terrorist organization,” “spreading terrorist propaganda,” “attempting to overthrow the current government” and “espionage.”

The SCF report underlined the cases in which the government also went after the family members of journalists who fled for safety, arresting the wife of a chief editor of a national daily in one instance, and jailing the brother of a leading Turkish journalist in another case.

Turkey went as far as to arrest a driver because he worked for a media outlet and was believed to have driven the company car assigned to a critical editor.

The center also directed attention to the difficulty of gathering information on the status of journalists since family members and lawyers are often unwilling to discuss details of the cases of journalists with researchers for fear of further punishment.

The report, including a full list of arrested, wanted and convicted journalists, can be found and downloaded under this link.