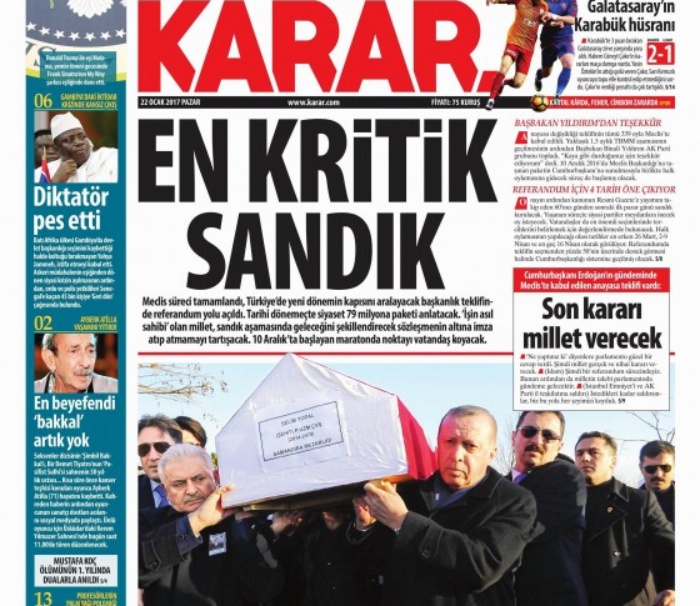 The huge troll army supporting President Recep Tayyip Erdoğan and the pro-Erdoğan media have targeted a daily that is supportive of former Prime Minister Ahmet Davutoğlu for its front-page photo selection on Sunday.

The Karar daily, which is considered a pro-Davutoğlu publication, ran a headline reading “The most critical ballot,” in reference to the upcoming referendum on an executive presidency with a photo of Erdoğan and Prime Minister Binali Yıldırım below carrying the coffin of a martyr.

Erdoğan’s troll army, in an apparently orchestrated campaign, accused the paper of treason and “perception games” for allegedly covert criticism of the executive presidency.

Some trolls even urged the closure of the paper due to its apparent opposition to Erdoğan. Former Prime Minister Davutoğlu had to step down in May 2016 at Erdoğan’s order.

The besieged daily issued a statement saying that attacking Karar based on the connection between a news story and an unrelated photo is unacceptable.

Turkey has shut down nearly 200 media outlets in a post-coup purge. No overt criticism of Erdoğan has been tolerated as journalists are easily labeled terrorists. Almost 150 journalists are currently behind bars in the country.