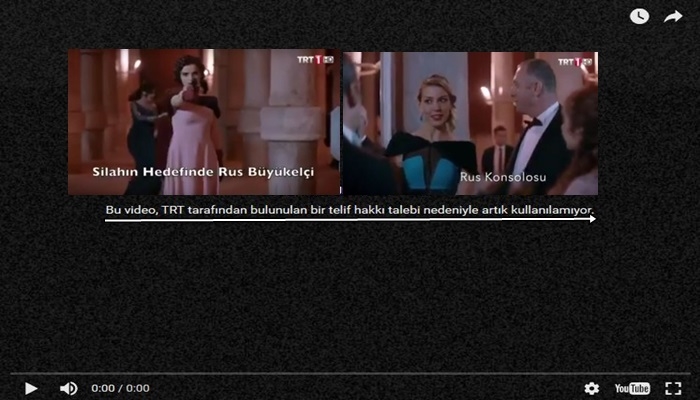 State broadcaster TRT has removed parts of a series from the Internet in which a woman tries to assassinate the Russian and Israeli consuls general during a reception, the tr724 news website reported on Friday.

After the assassination of Russian Ambassador Andrei Karlov by a policeman at an art exhibit in Ankara on Dec. 19, some pro-government Twitter users and journalists shared parts of a series broadcast two years ago by Samanyolu TV, which was closed down by the government for alleged links to Fethullah Gülen, in which there was an attempt on the life of the Russian ambassador at an art exhibition. It was portrayed as evidence that Karlov was assassinated by the Gülen movement.

But last week episodes from a TRT series were circulated on social media that was aired 25 days before the assassination of the Russian ambassador in which a young woman tries to assassinate the Russian and Israeli consuls general during a reception.

According to tr724, TRT started to remove installments of the series one by one from the Internet, claiming copyright issues.

The TV series, “Sevda Kuşun Kanadı’nda,” is about the Nationalist Turkish Student Union (MTTB), which was established in 1916. President Recep Tayyip Erdoğan, former President Abdullah Gül and most prominent Justice and Development Party (AKP) politicians were members the of MTTB.

Nurettin Yıldız, a controversial cleric and a staunch supporter of President Erdoğan, was also member of the MTTB, tr724 reported.

Mevlüt Mert Altıntaş, the policeman who shouted al Nusra Front slogans after shooting the Russian ambassador at an art gallery, was reported to have attended Yıldız’s sermons at Ankara’s Hacı Bayram Mosque.

Sharing one of the leaked e-mails of Berat Albayrak, minister of energy and son-in-law of President Erdoğan, Turkish Minute columnist Abdullah Bozkurt recently claimed on his Twitter account that the TRT series “Sevda Kuşun Kanadı’nda” was scripted under the order of Erdoğan.

In an email dated Nov. 22, 2015, director Yasin Uslu tells Albayrak that the series was nearing completion and that Erdoğan was aware of that. The director also says the series would be about the MTTB.