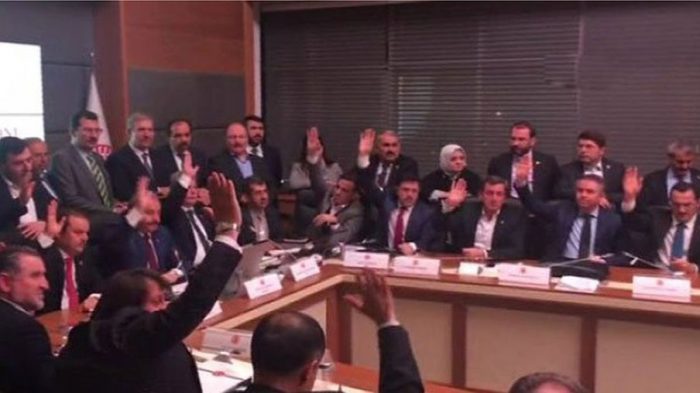 The parliamentary Constitution Commission has approved amendments to the Turkish Constitution proposed by the ruling Justice and Development Party (AKP) that pave the way to an executive presidency amid fears of one-man rule.

With the constitutional amendments approved in the early hours of Friday, the president will have the authority to dissolve Parliament.

In the proposed presidential system, the president will also continue to be affiliated with a political party and will appoint ministers as well as vice presidents.

The president will be vested with more powers including the closure of ministries by decree. All high-level public servants will also be appointed by the president.

A two-thirds majority in Parliament will be required to launch any investigation into the president.

The president will have the right to declare states of emergency without the approval of Parliament.

More critically the amendments, supported by the Nationalist Movement Party (MHP), also extend the authority of the president during a state of emergency including limiting rights and freedoms.

According to the approved 13th article, which governs the authority of the president during states of emergency, the president will be able to issue decrees limiting basic and political rights, which was not included in the first version of the amendments when they were proposed by AKP deputies in early October.

The approved article also adds a call to national mobilization by the president as being among the reasons to declare a state of emergency in Turkey.

In November, MHP leader Devlet Bahçeli promised Prime Minister Binali Yıldırım his party would support the AKP government when the constitutional amendments were submitted for parliamentary approval, including a switch to a presidential system of governance in Turkey.

AKP officials recently said that they would bring a proposal for a change to an executive presidency to Parliament in January and present it in a referendum in April.