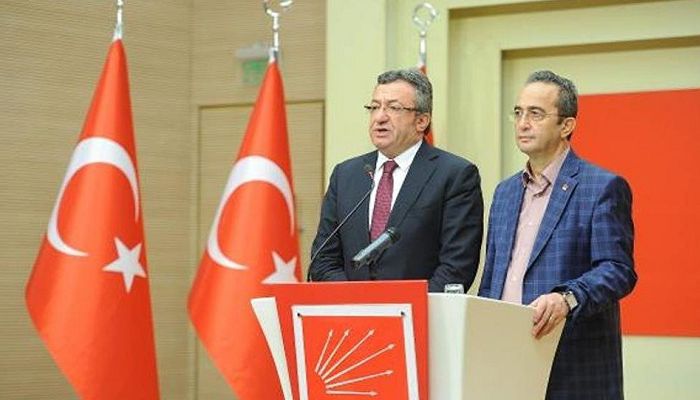 Main opposition Republican People’s Party (CHP) Deputy Chairman Bülent Tezcan and parliamentary group chair Engin Altay said on Sunday that a draft constitution prepared by the Justice and Development Party (AKP) and supported by the Nationalist Movement Party (MHP) was planned to be brought to Parliament’s General Assembly without mandatory debate in the relevant parliamentary commission.

Speaking at a joint press conference in Parliament on Sunday, Tezcan said the AKP, supported by members of the MHP, want the draft constitution to immediately be brought to the General Assembly for a vote.

“Both the AKP and the MHP voted yesterday [Saturday night] in favor of discussing the articles of the draft constitution without completing the necessary steps [according to parliamentary regulations]. However, there are at least 150 deputies who want to debate the draft in the commission,” Tezcan said.

Referring to a brawl on Saturday among members of the parliamentary commission, Altay also said CHP deputies were physically and verbally harassed by AKP and MHP deputies when they objected to the situation in the commission.

Calling on Mustafa Şentop, AKP İstanbul deputy and head of the parliamentary Constitution Commission, Altay told reporters that Şentop has illegally confirmed the next step in the commission to start discussing articles of the draft constitution.

Meanwhile, Prime Minister Binali Yıldırım and MHP Chairman Devlet Bahçeli were scheduled to meet at 6:30 p.m. on Monday to discuss the new constitution.

In November, Bahçeli promised Yıldırım to support the ruling AKP government when a draft constitution was submitted for parliamentary approval, including a switch to a presidential system of governance.