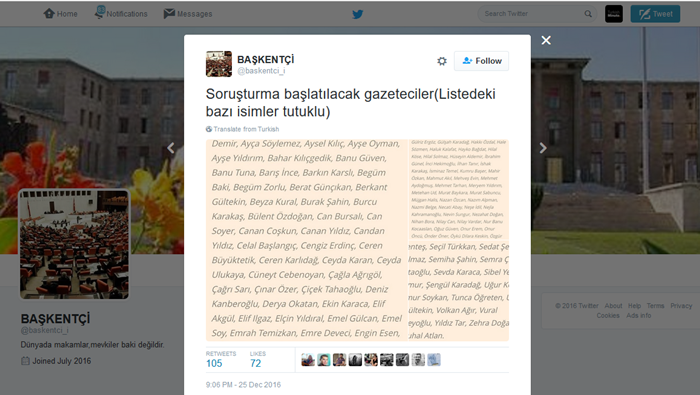 One of the pro-Erdoğan insider Twitter accounts claimed on Sunday that 154 journalists will soon face investigation.

The list of journalists was leaked hours after Turkish police teams detained dozens more journalists during simultaneous raids in İstanbul and Diyarbakır.

Pro-Kurdish Dicle news agency (DİHA) news manager Ömer Çelik was detained in Diyarbakır, while DİHA reporter Metin Yoksu and the Birgün daily’s accounting supervisor Mahir Kanaat were taken into custody in İstanbul. One of the editors of the Diken news portal, Tunca Öğreten, was also among the detainees.

In the meantime, the Turkish Journalists Union (TGS) released a statement on Sunday in which it condemned the detention of the journalists.

“We have woken up to a morning again with the news of an [police] operation. The target is again journalists,” said the TGS in its statement.

Approximately150 journalists have already been reported to be in Turkey’s prisons.

According to Turkish media organizations, over 150 media outlets in Turkey were closed down, 866 journalists fired from their jobs and 620 journalists had their press cards canceled in past months over alleged links to a failed coup on July 15 that claimed the lives of more than 240 people.