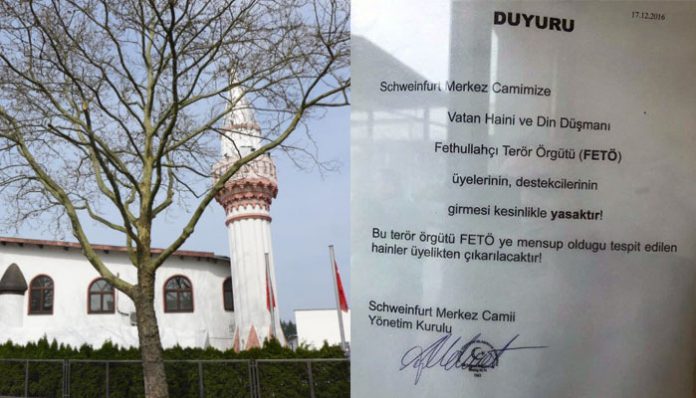 A mosque funded by Turkey’s Directorate of Religious Affairs (Diyanet) in the German city of Schweinfurt has banned entry to followers of the Gülen movement, inspired by the views of US-based Turkish scholar Fethullah Gülen, who the Turkish government accuses of masterminding a failed coup in July.

According to a decision made by the executive committee of the Schweinfurt Central Mosque on Dec. 17, members of FETO, a derogatory term and acronym for the Fethullahist Terrorist Organization, coined by President Recep Tayyip Erdoğan and the Justice and Development Party (AKP) government to refer to the Gülen movement, will not be permitted to enter the mosque premises and the mosque membership of those determined to be FETO members will be cancelled.

“Entry banned for traitor and enemy of religion FETO members, supporters of Schweinfurt Central Mosque. The membership of those who are determined to be the members of the FETO terror organization will be cancelled,” a leaflet hung on the gate of the mosque stated.

The mosque is funded by the Turkish-Islamic Union for Religious Affairs (DİTİB), one of the largest Islamic organisations in Germany, founded in 1984 as a branch of Turkey’s Directorate of Religious Affairs.

According to a recent report by the Hürriyet Daily News on Dec. 8, the Diyanet has gathered intelligence from imams in 38 countries on the activities of suspected followers of the Gülen movement.

Photos of individuals with alleged links to the movement were included in some of the Diyanet’s reports, the daily said.

The Turkish government pinned the blame for a July 15 coup attempt on the movement, while the latter has denied any involvement. Meanwhile, discriminatory practices and hate crimes against movement followers have surged since the putsch.

Officials, religious coordinators and religious services counsellors in Turkish mosques in the aforementioned countries have prepared 50 reports on the activities of movement-linked schools, businesses, foundations, associations and media outlets.

Media earlier reported that sympathizers of the Gülen movement were even denied entry to the mosques in Europe.

In the meantime, Dutch police, until early September, investigated 150 complaints lodged by sympathizers of the movement for threats and intimidation they received on social media. Investigations have resulted in a 42-year-old Dutchman of Turkish descent so far.

A 28-year-old man of Turkish origin was also handed down a prison sentence of eight months and a fine of 23,000 euros by a French court after he attacked several institutions affiliated with the faith-based Gülen movement in the country, in September.